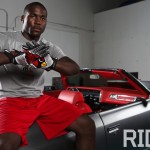 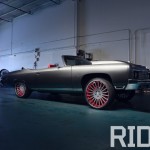 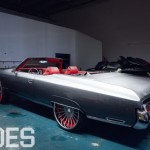 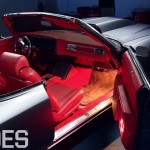 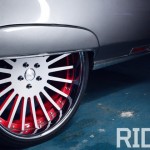 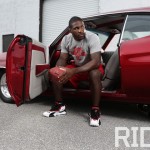 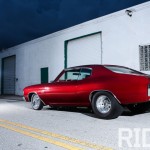 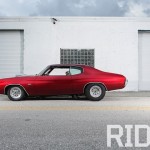 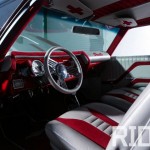 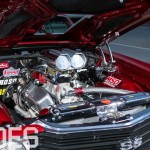 Arizona Cardinals Pro Bowl cornerback Patrick Peterson has been the man on the football field since he was a kid. He was a top five recruit out of Blanche Ely High School. After stacking up wins and awards at LSU, Peterson was also a first-round pick in the 2011 NFL draft. After only two seasons as a pro, NFL Network recently ranked him as the best cornerback in their third annual top 100 players list. The Florida native likes it fast on and off the field, preferably behind the wheel of one of his many custom Chevy muscle cars. Peterson doesn’t just collect them; he gets his hands dirty and works on them himself from the concept stage to the finished product.

RIDES: Being from Florida, you obviously grew up on old-schools. Did you have that in mind when you bought the ’72 Chevelle
Patrick Peterson: I definitely had that in mind. Growing up and seeing them all my life, I couldn’t wait to have the opportunity to build one myself. The `72 came to mind because my grandfather had one when I was young, and I fell in love with that car.

What condition was the Chevelle in when you bought it?
I pretty much cleaned that car out from top to bottom. What we did to that car is started from the bottom, now it’s here [laughs]. I customized everything the way I wanted it to be. We put the big block in it, put a mini-tub on it. That car is priceless.

With the Chevelle, did you feel like you were bringing some of that hometown car flavor to the desert?
Before I shipped it back to Florida, I definitely had to bring the South Florida swag out to the desert. When guys saw those cars, they’d be like, “Man, where are you from? Where’d you do that car at?” As a matter of fact, two days ago I saw a Chevelle that was completely custom on the road out here. It wasn’t as good as mine, but he did a pretty good job on it.

Most of your cars are late `60s and early `70s models. What is it about that era that sticks out to you?
First and foremost: They’re cheap. My grandparents pretty much raised me because my mom had me at a fairly young age, so that’s all I saw growing up. Being around the `68 and `71 Camaro to the `72 Chevelle to the `73 Cutlass—that’s all I’ve been around is those cars, so it’s like second nature to me. I’m a Chevy guy, and like they say, Chevy runs deep. That’s how my grandfather is, that’s how my dad is. Once I had the opportunity to afford them, it was a no-brainer to start collecting them and doing things I want to do to them.

Out of all of the old-school muscle, what is your favorite year and model?
I have to go with the `68 Camaro.

As a star NFL player, you are always either training, playing a game or doing media and charity work. When do you have time to work on your cars? And how much input do you have?
In the off season, I have a lot more time on my hands to work on cars. I don’t have to go very far because I have a lift in my garage, and I have a guy who comes over and maintains the cars for me. As far as motor work and bodywork, I’m starting to learn. I know how to do certain things, but I have a guy who guides me through how certain things work. I’m very hands-on.

You also work on the cars with your driver, Corey, who races the quarter-mile in your `68 and `71 Camaros. How did you get into racing?
My dad has a friend who was a driver, so we’d always watch him race at Palm Beach [International] Speedway. We’d go on Sundays and watch him compete. With me being a fast guy, I just like being around fast things. Once I was able to put fast cars together and take them to the track, [racing] was almost like my second wife.

I hear that you are heavy into RC, as well. What’s more fun and challenging? Building the models or the real thing?
I’d say the real cars. I still have my RC cars, but I don’t race them anymore; the only time I have the opportunity to race them is when I go home. In Arizona they don’t have [RC tracks] because of all the dust on the roads. It’s huge back home in Florida.

Your `73 Impala is crazy customized. What was your vision when you first got it?
We were going back and forth with that car for a year and a half. My vision for the car was to have something different. You normally see guys with these loud, three-color paint jobs and reflectors; I wanted to keep it classy and simple.

You’ve been in the league a couple years, and you’ve seen the best of the best when it comes to whips. Where do you rank your Impala compared to the others out there?
Larry [Fitzgerald] has some nice old-school cars; Darnell [Dockett] had a couple old-school cars; but I’m definitely, by far, the best. Those guys have people come up with ideas—I do everything myself. I may get input, but I come up with every idea. That’s what sets my [cars apart] from other guys’.

What shops helped you execute your vision on the Chevelle and the Impala?
For my `73, YM Motors out of New Orleans. I gave them my vision, and they put the car together for me. Arizona Hot Rods did my Chevelle.

What’s your favorite aftermarket addition to the Chevelle and the Impala?
On my Chevelle, I’d have to say the motor, but my favorite part is the transbrake and line lock, so I can do burnouts and pop a wheelie sometimes if the road has enough traction. On my Impala, I love that it’s a convertible, but I’d have to go with the big-block 454 LSX and the sound system.

You have four younger siblings. How often do they hit you to borrow your cars?
My brother, all the time, especially when he went to prom. He was like, “I gotta hold that ’73, I’ve never seen anyone come in a Donk.” He was pretty stoked I let him borrow that. He’s the only one of my siblings that I allow to drive any of my cars. He’s 20 and old enough to be responsible. Now that my sister is a senior, she’s already hit me up to borrow my Rolls-Royce for her prom. She went straight to the top; you know how those high school girls are.

What else do you have your eye on?
I have my eye on a Chevy C10 right now. Just trying to get the guy down on the price. That’s going to be my next project. I’m starting to see a lot of them, and I have some pretty good ideas of what I want to do with it to make it pop.

We’ll have to circle back around with you when you get the C10 done.
Oh, yeah, hopefully she’ll be done around this time next year.