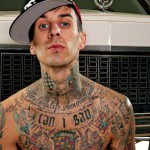 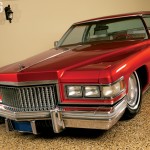 This bagged, ‘75 Coupe DeVille has a 500 under the hood, but Travis insists that the real heat can be found in the custom plaid interior since this ‘Lac is where him and his wife freak in the back. Travis and Shanna were also born in ‘75, making this their Coupe DeThrills. 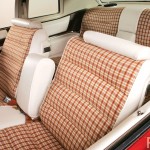 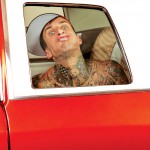 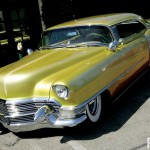 Depending on the angle, this ‘54 ‘Lac can appear to be yellow, cop- per or even pink. It’s chopped, sectioned and sitting on Caddy roadster wheels wrapped in whiteys. Travis opted to just do a basic lowering kit, so this bomb could be driven daily. 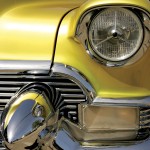 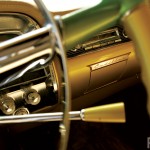 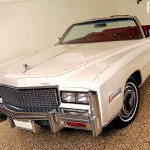 Somethings are better off left untouched like this super-white ‘76 Eldo. It’s a pure Cada-lassic that Mr. Barker plans on one day passing on down to his seed. 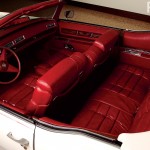 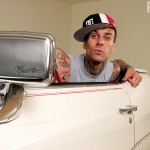 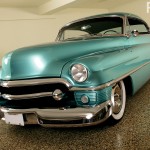 This ‘53 is ironically one of Travis’ fave cars, ‘cause he bought it pre- customized. The previous owner was terminally ill, and insisted it got a good home. You can say Travis gave this shaved, lowered and sectioned ride a mansion. 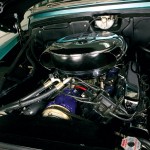 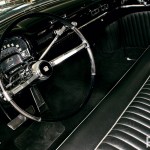 It’s said that to tattoo your first loves name on you is a guaranteed jinx. Lucky for Travis Barker, Cadillac hasn’t cheated on him and broke his heart like some dumbass trick. Travis’ Caddy-inked chest and ribcage might seem a little crazy, but then again so are his Caddies. The rock star has been keeping himself busy with multiple side-projects, including his bands The Transplants and Plus 44, his clothing line Famous Stars & Straps and his label LaSalle Records. But when Travis and his wife Shanna Moakler are not busy showing Nick and Jessica how relationships are really done on MTV’s Meet the Barkers, Travis is wrenching on a Caddy. He has owned over 15 of them. Some stay showroom stock while others get more cut up and tweaked than Lil Kim and Jacko (but with better results). So RIDES figured no one better could tell you the dos and don’ts of hooking up a ‘Lac. Take notes and don’t Blink.

Travis Barker on:
Classic versus Custom

“Cars are like girls. You can either want a really good, honest girl that is loyal, or you want a super whore. It’s hard to get both. Yet, I try to have both with my cars. I have both extremes. But when doing a modded car you gotta have taste. My ‘53 and ‘54 are super modified, but people look at them and say how beautiful they are and don’t even realize that any modifications were done. If you can pull that off, then you’ve won. If people are seeing your shit and saying, ‘Oh you shouldn’t have done that [to a classic],’ then you didn’t do a good job. Then some cars I just think that you can’t touch, like my Eldorado that has only 6,000 miles on it. I’m not trying to fuck with that car. I want to keep it as close to original as I can. But with my ‘54, the engine was really tired and the body needed work, so fuck yeah I’m going to chop and section it. I guess it all depends on the car. Like, you don’t go marry a whore, and treat some rad girl like shit.”

“I’ve always been one for keeping older rims or classic style rims on older cars. Wires, and old hubcaps, or polishing hubcaps, or even switching out the center caps on a wire wheel can make such a difference. I haven’t been able to put like big, new 20-inch rims on any of my cars. I can’t do it. Except for those 20-inch Dayton wires.”

“If Mister Cartoon is airbrushing your car it’s gonna be sick. I think I’m gonna buy a black Escalade either this year or next year when the V12 comes out, and I’m just gonna air- brush and piece out all my door jams. I love that.You just need to make sure you get a good paint job that works with the rest of the car.”

“I love chopping(1) because it changes the whole look of your car. It’s like wearing your hat low—that’s what a chopped car looks like to me. I love sectioning(2) and channeling(3). We did that with my ’53. We replaced all of the metal teeth on the side of it. It made it look higher, and then we chopped the top to it, which made it look short and fat. We also shaved(4) the sides off.”

Judge a Book by its Cover

“The outside of your car depends on what you do with the interior. If your exterior is wild and crazy, then I’m down for your interior to be crazy, too. My ‘75 is wild. There is plaid everywhere in the interior. But then my Eldorado has [stock] blood-red leather interior. You can’t beat that!”

“I’m not a big hot rod guy. I’m into cruising—I like it low and slow. I mean, there is a time and a place for it. I want to be able to get down if I have to, but otherwise, I just want people to respect my car. It’s about keeping a car sexy to me, just chrome it out. If I wanted to go down and get crazy, I’d get a Nova or a ‘69 Camaro.”

“Once again it’s like a girl. You don’t want a small and petite blond-haired chick to sound like a football player when she talks. My ‘66 has big glass-packs and it sounds crazy mean. But my ‘76 has nothing. It’s stock, and I’m not gonna fuck with it.”

Get Low, Get Low

“Some cars looks can be changed completely by dropping(5) ‘em. Then, if it’s one you drive daily, you don’t want to worry about your hydraulics leaking everyday. Most of my cars that I have as daily drivers, I don’t fuck with. But my ‘75 and my ‘53 have frames on the ground and I love them! It looks beautiful. My ’66, [which is under construction], is going to be my first car that will have hydraulics on it. I always liked airbags more, but there is something about hydros—it feels firm and makes more of a statement to me. But airbags are a little more conservative. If you wanna park and look mean, I think airbags do the trick.”

1 Chopped: A hardtop car that has had its roof lowered to create a low aggressive look.

2 Sectioned: Removing a horizontal section of body work to lower the overall height of the body.

3 Channeled: Cutting the floor so the body rests lower on the frame rails to achieve a slammed appearance.

4 Shaved: Door handles and body trim that have been removed and smoothed over.

FROM JUNE/JULY 2005 ISSUE OF RIDES MAGAZINE