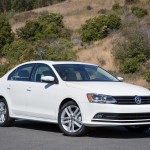 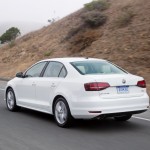 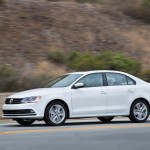 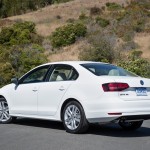 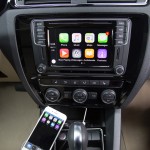 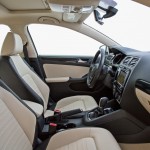 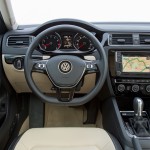 Exterior: The 2016 Jetta is certainly charming but VW definitely wasn’t trying to reinvent the wheel in regards to designing the Jetta’s outward appearance. Quite frankly, the styling is about as vanilla as it comes and screams fleet vehicle. However, those hoping to fly under the radar a bit would definitely appreciate its simplicity. Not that there is anything wrong with the Jetta’s looks, it’s just that VW didn’t take any risks on the styling and an extra crease or edge here and there sometimes is appreciated. With that in mind, the Jetta is impossible to hate but won’t raise any eyebrows, either.

Interior: The inside of the Jetta is quaint and comfortable. Again, nothing blows you away about the interior yet it still provides a consistently calm commute. The leatherette-covered seats are fairly cozy and the seating position is proper. For a compact car, the 2016 Jetta sedan has surprisingly ample interior space, however the rear legroom is a bit tight. Back to the front seats, both are manual, which takes a bit of getting used to but not much of an issue so long as you don’t swap drivers much. If it were an option, I’d swap the power sunroof for power seats any day.

Electronics: My test vehicle came equipped with the Technology package, which includes the rearview camera, push button start and the Discover media head unit featuring a 6.3-inch touch screen, navigation and my favorite interface, Apple CarPlay. The display on the infotainment unit is crisp, the controls are easy to operate and the overall use of the unit is fairly effortless.

Performance: The 2016 Jetta is actually quite enjoyable to drive. The 1.8L TSI DOHC turbo-charged four-banger can be peppy at times but for the majority of your ride it will be just enough power to get you through your commute. The gas mileage is outstanding at near 30 mpg. The handling and smooth demeanor of the new Jetta makes for effortless travels which ultimately goes a long way if you spend a considerable amount of time behind the wheel.