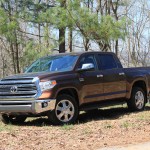 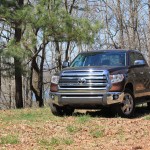 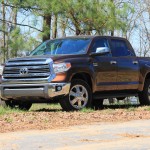 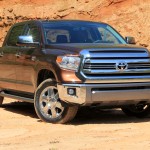 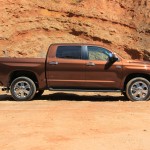 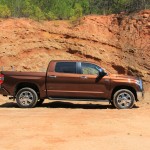 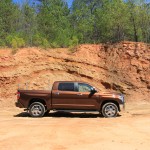 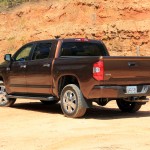 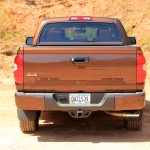 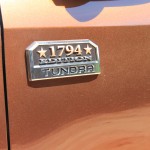 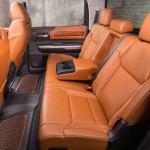 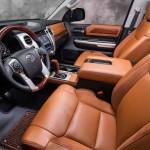 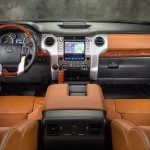 Exterior: The Sunset Bronze Mica hue on this 1794 Edition Tundra is an acquired taste but I certainly fell in love with the tone. Not only does it set your rig apart from the thousands of similar trucks on the streets, the color comes alive in the sun displaying a range of colors that make it hard to take your eyes of this massive truck. The Tundra’s wheels are OK but they seem wrong for this particular vehicle and I’m not sure if it’s the gaudy chrome or the style or the combination of both. Thankfully, that’s not something that can’t be easily overcome. The bed is slightly shorter than most truck lovers would yearn for but the improved cabin space more than makes up for it. All in all, the Tundra looks as good as it ever has.

Interior: I’m a huge fan of Toyota truck and SUV interiors. Toyota simply makes the most out of every square inch and that ultimately enhances your daily commute. In the Tundra for example, the cabin is so massive that it feels more like a mobile command center than simply the inside of truck. Like most people that buy Tundras, I have lots of things to stow away – my laptop, iPad(s), files, folders, books, etc – and there is somewhere to put all of these items. The dimensions also provide a truly comfortable experience for you and your passengers, as you’re not piled up onto of each other. In the back, you’ll find the most comfortable rear seating in a truck, period. You can easily fit two or three adults in the rear with room to spare. Also, flipping the rear seats up provides a plethora of space for furniture, large dogs, party supplies and whatever else you can imagine to pile back there. If it’s raining and you need to haul a sizeable item, it’s not far-fetched to just put it in the back seating area. The Texas-inspired brown leather and suede interior truly fits the 1794’s rugged aesthetic. The only thing I would change is the faux wood grain. I understand the goal was to utilize as much brown as possible but this should have been omitted. And even though this vehicle has a massive cabin, road noise is virtually non-existent which is a huge plus in a rig such as this.

Electronics: The 1794 Edition also comes equipped with the Entune Premium JBL Audio system featuring a seven-inch touch screen display, navigation and Toyota’s Entune App Suite. As with everything Toyota, this system is functional and simple with just the right amount of buttons and menus. The only negative I could find with the system is that the voice recognition doesn’t really work or at least while driving. Outside of that feature (which I would never use anyway), the JBL system pumps out some sweet tunes as you’re cruising down the highway and adds to the overall driving experience.

Performance: The 5.7L V8 under the Tundra’s massive hood is a tested and true power plant that never disappoints. It has ample acceleration, outstanding low-end torque and can tow over 10,000 pounds with ease. For the most part, the ride is pretty smooth in the Tundra, although on occasion it can get a little bumpy at high speeds on roads that aren’t exactly perfect. Also worth noting, the 2016 Tundra 1794 edition comes equipped with the largest fuel tank in its class – 38 gallons – which is almost 12 gallons larger than previous years. The larger tank certainly is appreciated with fewer trips to the pump and more time on the pavement (or dirt).

Final Verdict: The 1794 Edition Tundra simply does it all. It looks great inside and out, it’s functional in whatever situation you place it in and it’s priced quite fairly in relation to its options. Even though the Tundra has been around for a while, it’s a no-brainer for any potential larger truck consumer.