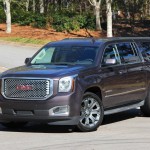 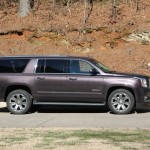 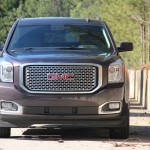 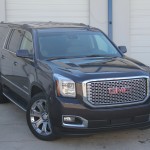 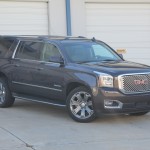 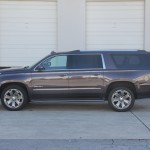 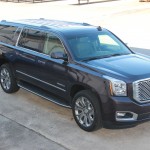 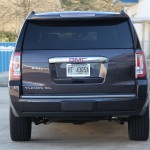 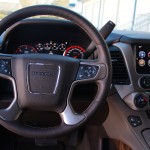 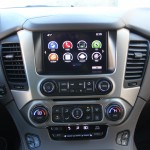 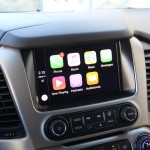 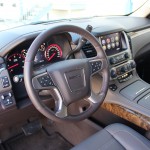 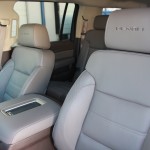 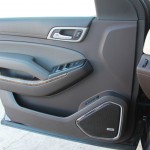 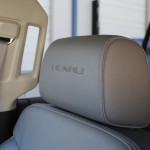 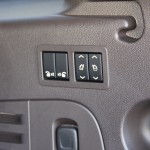 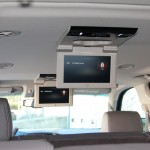 Exterior: Since its introduction in 1999, the Yukon Denali has always been a great looking vehicle and the newest variant is definitely no exception. There’s just something about that signature Denali grille that reminds you the owner of the vehicle paid more than you did for your Tahoe but didn’t blow their dough on an Escalade. At almost 19 feet long, the Yukon Denali XL is basically a luxury bus produced primarily to haul your upper-middle class family around town. Thankfully, the length doesn’t affect the aesthetics. In fact, the extra inches give it a unique appearance and demands attention wherever you travel. The 22-inch wheels are a perfect fit and the Midnight Amethyst Metallic hue the lengthy Yukon is adorned in is exclusive in its own right, as you don’t see many purple vehicles on the road.

Interior: Inside the Denali is about as luxurious as possible for an American SUV. Perforated leather seats, heated steering wheel and a nice mix of aluminum and wood trim all make the space divine. Every row of seating is treated to luxurious accommodations such as heated and cooled driver and front-passenger seats, heated second-row power-release and power-folding third-row fold-flat seats. One of my favorite interior features is the massive center console up front, large enough to fit tablets, books and most anything else you can think of cramming in there. One thing I’m a stickler about – especially in expensive vehicles – is road noise. Thankfully, GMC nailed it as they’ve done everything imaginable to keep that massive cabin quiet. Acoustic-laminated windshield and front-door windows, triple-sealed doors, active noise cancellation and a valved exhaust system drastically reduces interior noise and vibration and do wonders in keeping the decibels down. Got some cargo? Good, because the Denali XL has about as much as you can get in a non-commercial vehicle. Try 121 cu feet of luggage capacity. GMC could have probably added a FOURTH row back there if they wanted to get crazy.

A/V: The eight-inch, full-color cluster display on the infotainment screen give you touch screen access to all audio, navigation and phone operations. My favorite feature is Apple CarPlay, which is a brilliant addition if you have an iPhone as you simply never have to worry about fumbling with your phone while driving. The tunes are pumped out precisely via the Bose Centerpoint surround sound stereo system and the little ones in both the second and third rows are entertained via the dual nine-inch LCD screens connected to the vehicle’s Blu-Ray player.

Performance: To be such a large vehicle, the Yukon Denali XL is about as nimble as it can be. At first, it may seem a bit barge-ish but after a couple days of daily driving adjusting to the Denali XL’s length becomes second nature. The 6.2L EcoTec3 engine produces 420hp and 460 lb-ft of torque, which is plenty power to propel such a massive vehicle and anyone or thing you transport in it. The overall ride in the Yukon Denali is silky-smooth and comfortable thanks to GMC’s Magnetic Ride Control.

Final Verdict: Have a big family and about $80k to spare? If so, the Yukon Denali XL should certainly be at the top of your list.