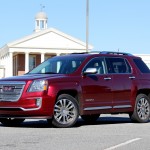 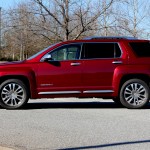 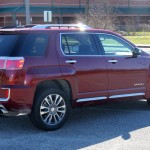 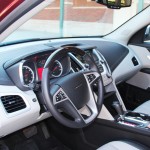 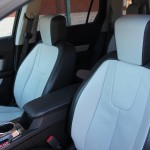 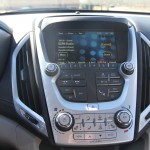 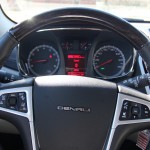 Exterior: The 2016 GMC Terrain Denali certainly makes a commendable effort at mirroring its larger siblings’ aesthetics. Most appealing are the traditional Denali chrome grille with its signature circular cutouts and the considerable amount of chrome satin moldings highlighting the exterior. The Crimson Red paint also does wonders for the boxy and bold body lines including the protruding hips that surround all four corners. The Terrain Denali looks as if it means business and casts a luxurious vibe. The 19-inch wheel upgrade for the Denali also aids in enhancing the overall appearance.

Interior: Inside the Terrain Denali is a modest blend of two-tone leather with hints of brushed aluminum and even a bit of wood on the steering wheel. Nothing is necessarily memorable but appreciated nonetheless. There’s ample room for four adults and there’s plenty of room out back for groceries and all your kid’s sports gear.

A/V: The seven-inch color touch screen head unit with navigation and GMC Intellilink is attractive and quite easy to operate. It’s a bit dated compared to other radios in the GMC lineup but it still works quite fine. A 4G LTE OnStar connection and a built-in Wi-Fi hotspot are also included but Apple CarPlay would have certainly been a welcomed addition. The premium Pioneer audio system is a modest upgrade from the base Terrain as its tunes fill the cabin quite well. A plethora of driver aids such as lane-departure warning, forward-collision alert and blind spot monitoring are also included and totally helpful.

Performance: The Terrain Denali got the memo from its older brother, the Yukon Denali with a healthy power increase over the base model. The Terrain Denali’s 3.6L six-cylinder engine is an accepted upgrade, yet its addition isn’t exactly noticeable. Matter of fact, the V6 is sluggish even though it has more power as it strains a bit especially when you have multiple passengers and/or under heavy acceleration. To put it kindly, the driving experience still feels economy. It’s not that there’s anything necessarily wrong, it just doesn’t give you that smooth ride synonymous with the Denali moniker.

Final Verdict: The aging Terrain platform is certainly due for an update but the Denali distinction helps ease the pain of an antiquated compact-crossover. However, for $41k there are plenty of other options that would help stretch your cash.