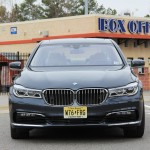 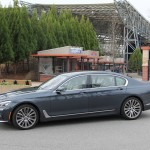 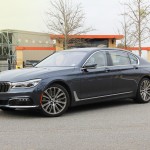 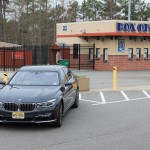 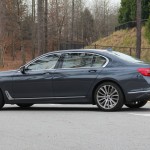 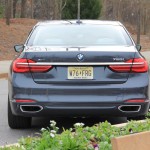 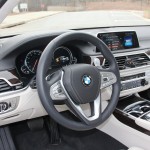 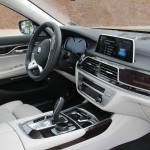 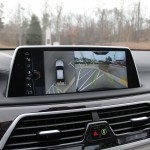 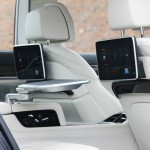 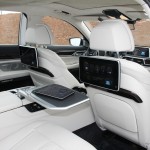 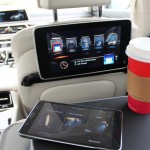 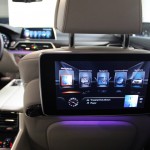 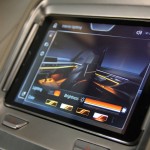 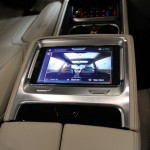 Exterior: The 2016 BMW 750i’s exterior updates aren’t exactly groundbreaking but certainly refined. BMW has added a touch of chrome here and there, yet overall it still retains the familiar classy and understated appeal it’s maintained the last few years. With that in mind, the new 750i is quite attractive and certainly garners looks and nods of appreciation wherever you go. The Imperial Blue hue our test car was coated in was fairly safe and I’d be willing to bet the 750i looks even better in BMW’s Mineral White or Glacier Silver.

Interior: The interior reminded me a lot of the Mercedes-Maybach S600 – which is a great thing. The optional Rear Executive Lounge Seating Package is about as a classy and comfortable as it gets with gadgets and plush appointments galore. The seating is comfortable and the mobile workstation can create quite a productive and/or relaxing experience. Up front, the driver and front passenger are certainly treated to the same overall experience, as the 20-way heated power multi-contour Nappa leather seats are ultra comfortable while still providing proper support. Our test vehicle was also equipped with the Interior Design Package, which included wood trim all over and added the Alcantara headliner as well. The dash is classic BMW and everything seems to be placed where it should. I was also a big fan of the interior LED lighting that could change the color on demand.

A/V: The electronic capabilities of the 2016 BMW 750i are mind-boggling and would be borderline confusing to someone who isn’t into technology as much as I am. There’s the Gesture Control which is not only cool, but also helpful in maintaining focus on the most important task – driving. You can change the volume of the sound system by making a circular motion with your hand, dismiss a call with a simple swipe and customize what a gesture enables. However, to operate the system I mostly stuck to iDrive 5.0 which worked just fine. The back-up camera is the best I’ve seen in a car in 2015. The image was so crisp and clear that if you told me it was 4k quality, I’d believe you. And if you want to have some real fun, try squeezing into your cluttered garage and watch and listen to all the buzzers and indicators go wild! The Bowers & Wilkins sound system upgrade (a $3400 option) is money well spent as the interior cabin transforms into a concert hall when the volume is increased. While in the rear, you can put the on-board WIFI to good use on one of the two 10-inch screens mounted on the backrests. Also, the removable seven-inch Touch Command tablet acts as a controller for a myriad of convenience features such as navigation, entertainment and seating.

Performance: As with most high-dollar sedans today, the new 750i has multiple driving modes which create optional personalities the 750i can take on which is great. As I found, when chauffeuring around the in-laws, the comfort mode was perfect but being a performance enthusiast, I utilized the Sport setting as much as possible because I want to maximize my driving experience. Under the hood, the 750i’s 4.4-liter twin-turbo V8 pumps out an impressive 445 horsepower and 480 pound-feet of torque. Even though it’s plenty powerful, at times the car still felt a bit heavy on acceleration yet this was not really an issue during daily driving.

Final Verdict: If you’re a high-level executive and have an affinity for the BMW brand (and have a chauffeur on staff), this is the absolute ideal vehicle. If you simply want to drive around a luxurious, capable sedan, save yourself about 30k and get the 750i minus the upgrades.