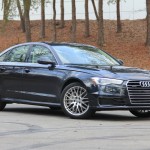 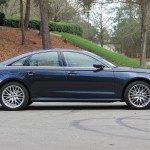 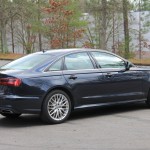 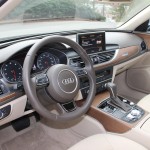 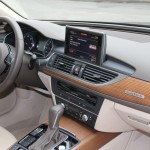 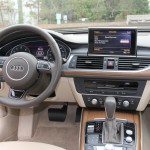 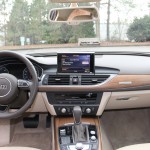 Exterior: The Audi A6’s aesthetics are classic and refined with a hint of sports car. The A6 particularly shines up front where the wide-mouth chrome grille is prominently featured, cascading down from the hood to the bottom lip of the front bumper. Add in the signature headlight-mounted LEDs and this car certainly has a prestigious presence traveling down the boulevard. I can’t stress enough that the A6 is downright mesmerizing head-on and it’s a vehicle you simply will never get tired of seeing in your garage. The 19-inch wheel upgrade is a welcomed addition and the Moonlight Blue metallic color is attractive but a little on the safe side. A sexy silver would unquestionably do wonders for the bodylines of such a fine ride. Either way, the A6 – even in the base level trim – looks like a million bucks.

Interior:The Atlas Beige leather interior was a bit tame and the overall feel of the materials used in the A6 was OK. I particularly was not a fan of the layered Walnut Wood decorative inlays. I understand what they were attempting to pull off with the matte finish of the “wood” (as opposed to the high gloss treatment most luxury cars flaunt) but it just didn’t work in this instance. Overall, that’s how I felt about most of the interior; it just didn’t feel up to the German luxury car standard and certainly not what you expect in comparison to its gorgeous exterior. Or perhaps I’ve been spoiled by cars twice its price and don’t know what type of interior you get for under $60k these days? Outside of that, the A6’s cabin is very comfortable, quiet and a pleasant place to spend your daily commute.

A/V: The electronics throughout the A6 were what you would expect from a new-school Audi – impressive. I especially enjoyed the color driver information system in the gauge cluster and the fact that the LCD screen motorized out of the dash. Most sub-$70k luxury cars these days have gotten lazy and think that simply sticking it on the dash is acceptable. Our test car came equipped with the optional Audi MMI navigation with MMI touch, Parking System plus featuring a rear view camera and a myriad of sensing and detection systems that certainly comes in handy. It’s certainly no A8, but the A6 holds its own in the electronics department and if you’re a gadget freak like me, you’ll feel right at home.

Performance: The 252 hp 2.0L four-cylinder turbo engine isn’t exactly something you’d want on the Autobahn. It would be unfair to say that it’s underpowered but at times it certainly leaves you wondering if the power plant provided has enough push for such a large vehicle. However, once you get going it’s smooth sailing on the highway and the little four-banger produces respectable performance when traversing through the city. Thankfully, there is quite an upside to the A6’s lack of performance; fuel economy! The A6 gets close to 30 MPG and as long as you keep the pedal off the floor, you can almost muster an entire week of driving on one tank.

Final Verdict: If you yearn for the status and stature that come along with owning a brand new Audi for a fair price, it’s hard to beat the 2016 Audi A6 2.0T. It certainly looks like a much more distinguished vehicle and you’ll get respect pulling up to business meetings behind the wheel.