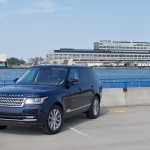 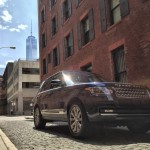 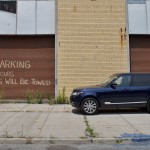 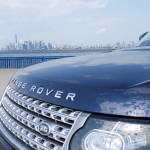 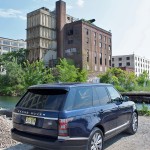 Story & Photos By: Will Sabel Courtney

The Range Rover might be more traditionally identified with cruising up to English manors, blasting across African deserts or blowing through South American jungles, but it’s hard to think of a place where it’s more at home than on the streets of New York City.

Think about it this way. To make it in NYC, above everything else, you’ve gotta be tough, and few rides are tougher than the Rangie. Built on an aluminum-intensive chassis that was all-new for 2012, its bones are strong enough to handle some of the worst off-roading planet Earth can dish out. Potholes and cobblestones disappear beneath it, even in spite of the surprisingly good-sized factory rims. (Buyers can spec it out with wheels up to 22 inches.)

And that’s without diving into the sea of gadgets and programs Land Rover’s outfitted the Range Rover with. Hill Descent Control, Automatic Speed Limiter, Low Range, Terrain Response 2—the Rangie packs more electronic off-roading doo-dads than most owners will ever even know about, let alone actually use.

The Range Rover can plow through water that’s six-tenths of an inch short of a yard deep. It can tiptoe over rocks and trees nearly a foot tall. It can pull itself up a 34.7 degree slope, lower itself down a 29.5 degree one, and crawl sideways along one that’s more than 28 degrees. Anyone still questioning whether it’s tough enough for NYC?

What else? Well, New York is about power, and the Range Rover has that in spades. Land Rover has swapped out the entry-level naturally-aspirated V8 for the same supercharged V6 found in everything from the Range Rover Sport to the Jaguar F-Type. At 340 horses and 332 lb-ft, it’s actually down a bit in power compared to the engine it replaces, but this Range Rover never feels slow. Tromp on the gas, let the eight-speed automatic shuffle down a few gears, and the Range Rover rears up like a Chris Craft and bolts.

If that’s not enough performance for ya, Land Rover also sells the Rangie with a 510 horsepower supercharged V8 that’ll throw this two-and-a-half ton SUV from 0-60 in just over five seconds. And that one’s a hoot, no doubt. But for NYC—and really, for pretty much everyone who’s not worried about outrunning the bad guys in a Michael Bay flick—the V6 brings a sweet spot of power and control.

And New Yorkers value style. And the guts on a Range Rover are almost as stylish as interiors get in the stock automotive kingdom. The insides on this SUV will show up anything short of a Bentley or a Rolls—and those cost twice the price. It’s like a Greenpeace volunteer’s worst nightmare inside, with leather and wood everywhere. Even an Audi A8 or a Benz S-Class can’t quite keep up; even if they rack up points over the Rangie on materials and design, the Range Rover’s interior wins out for the light, airy feeling it gets courtesy of the giant windows and even bigger moonroof.