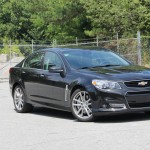 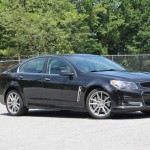 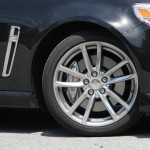 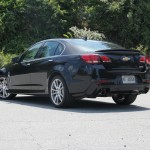 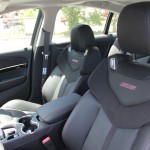 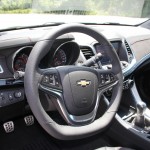 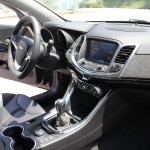 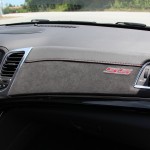 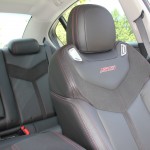 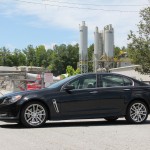 Exterior: The new Chevy SS is probably the most unassuming performance car ever with its cousin, the fourth-generation GTO coming in a close second. If you don’t know the history of the SS or Chevy in general, you’ll more than likely pass it off as a Malibu, Impala or even a Cobalt. To some, the mundane appearance could be a turn-off and doesn’t justify the price tag but the Chevy SS isn’t for the person yearning for the fanfare. However, Chevy did a respectable job in adding performance-inspired appointments with a menacing front fascia, chrome fender vents and rear deck lid spoiler. Staggered 19-inch forged aluminum wheels wrapped in high-performance Bridgestone tires are also a nice touch although I would love to see the wheels in a more aggressive shade such as gunmetal or black.

Interior: Inside the Chevy SS is a perfect mix of sport and class with racing-style seats similar to those in the new Z28 Camaro and leather and suede covering the dash and doors. The SS could easily seat four full-size adults comfortably and everything is properly laid out in the cabin. The only gripe I had with my six-speed manual model was that with drinks in the cupholders it was a little difficult to shift gears properly.

A/V: Chevy’s MyLink infotainment system with the eight-inch touch screen is a breeze to operate and the bluetooth streaming audio makes for easy connectivity with your smart phone. The heads-up display (an option I usually could care less about) was actually very helpful in a car such as this as I opted for the screen that displayed MPH and RPM which certainly aided in regulating my driving style with such a powerful vehicle.

Performance: Driving the 2015 Chevy SS is a visceral experience that will leave you grinning ear-to-ear after every romp of the gearbox. You truly feel that you’re driving a modern muscle car and forget that you’re behind the wheel of a sedan akin to a Chevy Malibu. If you’ve ever had the pleasure of driving a Camaro SS or Corvette, the feeling is virtually identical to the Chevy SS. With the 6.2L LS3 under the hood pumping out 415 horsepower and 415 ft lb of torque mated to the TREMEC TR6060 six-speed manual transmission, the SS is just plain bad ass and will plant you in your seat. The LS3 also barks out a sultry exahust note that you simply never get tired of hearing. On top of it being loads of fun, the SS is also quite streetable when you want it to be which is the brilliance of a car such as this. Yes, you can actually have the best of both worlds. And the SS isn’t just great for romping down a quarter-mile, it also handles the curves effortlessly thanks to the Magnetic Ride Control and MacPherson suspension. And to make sure you get this beast to a screeching halt, massive Brembo brakes on all four corners come standard.

Floss Factor: Unless you come across a die-hard Chevy and/or Holden fan, you won’t earn any extra props on the streets with the SS.  However, knowing you have a sedan that could whip the pants off most vehicles on the road while still being able to seat multiple passengers and haul luggage should be satisfaction enough to any hardcore car guy (or gal).