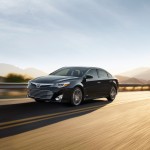 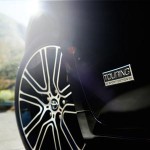 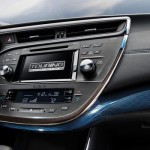 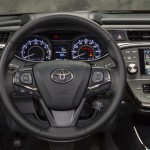 Exterior: The Avalon certainly has come a long way since its days of being known as a vehicle only for the retirement crowd. The exterior is sharp and stylish but doesn’t take too many risks, either. The Touring SE edition we had was definitely a step up from the beige-on-tan we’re used to with the Avalon. However, it seems as though they tried a little too hard to make the Avalon look sporty as opposed to stepping up the luxury appointments. The 18-inch black and machined wheels were a nice touch and the amount of chrome was just right. Also, I’m not sure if it’s just me but the new Avalon can easily be mistaken for a Camry and it really depends on who you are whether that’s a good thing or not.

Interior: In my head, the Avalon is the luxury model of the Toyota lineup so it should be quite luxurious inside. However, the interior really wasn’t anything to get excited about. The Touring model sports an all-black leather-trimmed interior with a few neat touches here and there but isn’t quite luxurious. Another knock on the interior is on the highway, the wind noise was certainly noticeable. I’m not saying it was loud, I just expected a luxury car to have a quieter cabin. All that being said, the interior is very comfortable and the heated leather seats are quite nice.

A/V: The Entune premium audio system sounds amazing and looks the 7″ screen looks pretty good. All the controls are easy to operate and everything works as it should. No real highlights here but it certainly gets the job done and to the Avalon buyer, I’d bet that’s all they care about.

Performance: If there is one thing the Avalon has in regards to performance it is silky smooth acceleration! Pushing the pedal in this sedan is a dream and borderline exciting at times. On top of that, the ride is very comfortable as it should be although you’re not going to be whipping this thing around any sharp corners. Simply put, this is a perfect vehicle for businessmen and or traveling salespeople.

Floss Factor: In the Touring edition, the Avalon can be pretty trendy. You more than likely aren’t going to turn too many heads but for those who are Toyota fans, they will surely appreciate it.