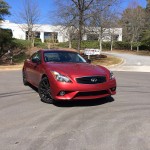 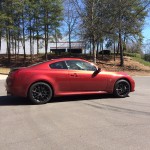 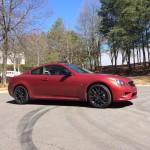 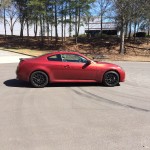 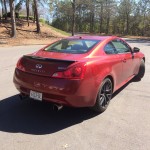 Exterior: If you’re familiar with the ‘G’ vehicles from Infiniti’s past, the Q60s should look quite familiar because it hasn’t seem to have changed much in recent memory. Although the black 19-inch wheels and matching spoiler take it up a notch, there isn’t much to brag about. I’m still a bit confused as to why Infiniti changed the nameplate and virtually nothing else (to the naked eye). Maybe they’re preparing us for a new rendition on the horizon? It would have been nice to see an updated front fascia or some type of LED strip worked into the head lights to differentiate this coupe from its older brothers and sisters. Be that as it may, the car is certainly attractive but definitely needs a revamp.

Interior: Inside is a little tight but in a car this size that is to be expected. The seats are actually a little too bolstered but they definitely keep you firmly anchored when carving corners. And even though the general look and feel of the interior is pretty standard for this type of vehicle, I would have hoped for a few more luxury appointments to justify the car’s price tag and to stay on par with the brand’s overall identity. Some classier buttons and knobs could go a long way and if I’m an Infiniti owner I think I wouldn’t desire sharing a push-to-start button with a Nissan Sentra.

A/V: The Infiniti hard drive navigation system with the Bose premium audio system is pretty impressive. More specifically, the audio system in the Q60s had the best bass response of any vehicle I’ve reviewed in the past 14 months! The stellar auditory output produced by the Infiniti ‘Studio On Wheels’ could be attributed to the car’s natural acoustics or simply the fact that over the years Infiniti has had time to perfectly dial in the system. Either way, I was very impressed with the tunes.

Performance: The Q60s with the (automatic transmission) could be compared to a very talented, yet streaky pro athlete. Let’s call it the Jay Cutler of the automotive world. That may sound a bit harsh but I found myself frustrated knowing that the car is capable of much more but it never really flexed its muscles. To provide another sports reference, it’s like watching Lebron settle for jumpers instead of driving to the basket. For starters, a vehicle that sounds this AMAZING needs to be able to back up that bark with some serious bite and at times the Q60s falls short. Taking off from a stoplight is probably the most head-scratching experience as you can feel the car attempt to put the power to the pavement and then halt as if it’s computer controlled to do so. I would assume that a manual version of this car would eliminate most of those problems but I can’t be sure. That  being said, there are certainly times when the car comes alive as the 15-50 mph jump is a pretty exciting. Outside of the drivetrain hiccups, the Q60s handles the corners very well and is clearly what the car is more primarily built for conquering.

Floss Factor: Even though the silhouette has been around for years, the Q60s looks damn good in its Venetian Ruby hue with black wheels and accents and its familiar profile still turns heads in the parking lot.