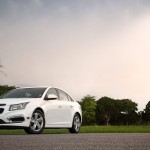 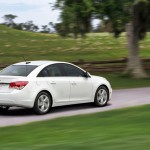 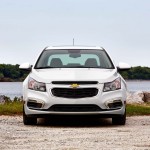 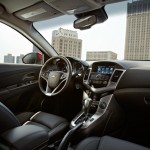 Story by Will Sabel Courtney

When Chevrolet brought out the Cruze back in 2008, it was a revelation. For the first time in, well, forever, General Motors had made a compact car that sat near the top of its class. No more crappy Cobalts or crummy Cavaliers; the Cruze was every bit a worthy competitor to the (figurative) titans of the class. It had style, it had decent space, it was well-made, and it got good gas mileage—all at a reasonable price.

Then in 2013, Chevrolet went a little wild—and gave us the Cruze Diesel.

By “us,” of course, I mean “the United States.” GM had been selling diesel-powered Cruzes in other markets for a while. But two years ago, sensing a resurgence in diesels in the American market, they decided to offer a Cruze with a 2.0 liter turbo diesel in these United States. As of 2015, that motor’s cranking out 151 horsepower and 264 lb-ft of torque, while still turning out 27 mpg city and 46 mpg highway. It’ll go 700 miles on a single tank of fuel, which is a hell of a lot farther than the average bladder can hold out. It’s damn impressive…

…but there’s one little issue.

See, the regular automatic-equipped Cruze gets 38 miles per gallon on the highway. (The stick shift-equipped Cruze Eco gets 42, but since the diesel only comes with an auto, we’ll keep this apples-to-apples.). Which means the diesel gets 21 percent better fuel economy on the highway than the equivalent gas-powered Cruze. That’s impressive. But it only makes financial sense if diesel costs less than 21 percent more than gasoline.

Of course, gas prices might jump back up again—and if they shoot past the price of diesel, well, you’ll look like quite the smarty-pants. At that point, you could eke out some fiscal savings by going with the diesel-powered Cruze—if the gas-powered and diesel-powered models cost the same.

Trouble is, the diesel-powered car costs about $1,400 more than the gas-powered one.

Factor in the inconvenience penalty that comes with diesel (it’s harder to find than gasoline, and often involves fueling up with the semi drivers, which I could give a crap about but the auto-ambivalent folks who make up a big chunk of compact car buyers probably wouldn’t enjoy), and the Cruze Diesel starts to seem like a bit more trouble than it’s worth.

Which is a shame, because the car is otherwise a sweetheart. The engine’s barely louder than the gasoline version’s inline-four, and its ample off-the-line torque makes scooting through traffic fun. Just don’t be afraid of popping the shift lever over to manual mode to make the most of the engine’s torque—max torque comes at 2,600 rpm, and the transmission will let revs fall far below that if left to its own devices.

Everything that’s not diesel-related about the Cruze is solid, too. Fresh off a minor refresh for 2015, the Cruze looks better than ever—and it’s always been one of the better-looking cars in the compact class. Inside, the car’s unexpectedly large, and boasts the same clean, well-executed interior design that’s come to define GM products of late. (Trust me, if you haven’t been in one of the General’s vehicles in five-plus years, you’re in for a shock.) The front McPherson strut suspension makes it surprisingly fun to toss around when the road turns windy. And the car’s loaded down with features; my Cruze Deez came with heated leather seats, remote start, satellite radio, seven-inch touchscreen display, Bluetooth, and a host of other features designed to make your life nicer.

Then again, you can get all of those on gas-powered Cruzes, too.

At the end of the day—gas or diesel, you won’t go wrong with a Cruze. Just make sure your local Mobil station has the green pump before you buy the diesel one.