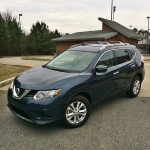 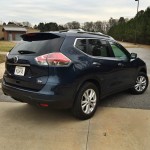 Exterior: The second-generation Rogue has certainly stepped its game up in the looks department. Ultra-trendy LED running lights up front matched with a modest chrome grille and overall styling cues reminiscent of luxury SUVs that cost thousands of dollars more gives the look and feel of a much more expensive vehicle.

Interior: My test vehicle was an SV model, which meant that although it wasn’t a base it did have cloth seats and not as many luxurious appointments as the SL premium. But in this type of vehicle, that’s surely to be expected and I found the interior to not only be pleasing to the eye but quite comfortable. The heated front seats were definitely a help with the winter weather and the optional third row seating also came in handy when shuttling a group of sweaty teens from basketball practice. Being that my interior was tan as opposed to the typically drab Nissan black definitely enhanced my opinion.

A/V: The best part of the Rogue’s infotainment center is the multi-angle camera system that provides 360-degree viewing with backing up and virtually transforms your parking experience. The seven-inch display is clear and easy on the eyes and the head unit pairs effortlessly with any phone connected to it.

Performance: As a rule, I hardly ever look at performance numbers of test vehicles before I drive them so as to not come into it with any biases. That being said, I was certainly surprised to find that he 2015 Rogue only had a 175 HP four-cylinder engine under the hood. Not that it was powerful, but it handled itself quite well in all driving situations and conditions. The acceleration was comparable to any car in the segment and the handling seemed light and responsive thanks to independent suspension front and rear, complete with stabilizer bars. On top of the satisfactory driving experience, the fact that the Rogue legitimately gets close to 30 MPG on average is quite impressive.

Floss Factor: Most crossover SUVs have a similar soccer-mom stigma to them yet most companies these days try their best to at least be presentable. With that in mind, I certainly was never embarrassed to take this out on the town and its practicality and usability when making sports practice runs or grocery store adventures made it all that more cool.