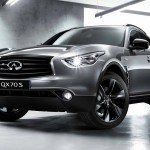 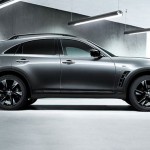 If the QX70 nameplate looks strange it’s because the good folks at Infiniti decided the FX35 needed a title promotion. And although I’m all for a little re-branding, it would have been nice to see some sort of major change – in anything.

The QX is a second generation FX so if you’re a fan of the model, you’re going to love the QX70. There’s nothing really to fall in love with about the QX70 but the sum of all its parts make you enjoy every day behind the wheel. The QX70 is nimble, comfortable and cool. Its 325 horsepower 3.7 liter V6 is peppy, but certainly won’t give you goose bumps. The QX70 handles every corner with ease and never feels too large like others in its class. Again, the QX is a jack-of-all-trades and master of none and honestly, that could be better than having a shiny one-trick pony. I’m going to continue to call this an SUV (is it now considered a crossover?) because it really epitomizes the acronym: Sport Utility Vehicle. The QX is one of the sportiest SUVs in its category and the cabin space, ride and functionality give you all the utility you would need for a typical commute.

The sport package, which is solely cosmetic, adds the 21-inch black wheels, black accents and a couple others odds and ends. Although the Sport additions are pretty tame with no body modifications, it certainly adds an aggressive attitude to the aesthetic. The upgrade isn’t a bad deal for an extra $3550 yet I’d probably opt to customize it on my own although I do commend Infiniti for adding an appearance package worthy of a custom car guy’s approval.

That being said, the Sport namesake is a bit of a tease, as I assumed a hearty V8 engine would be under the hood. Again, I’m not mad at the V6 because its proven throughout the years that it is a solid performer in plenty of Nissan/Infiniti vehicles but for the price of the fully-loaded Sport model, a V8 would probably tip me over the edge into purchasing the QX over other luxury SUVs.

My as-tested model came loaded to the brim with every option imaginable from the intelligent brake system to the Infiniti hard drive navigation system and everything in-between. Like all option packages, some of it’s necessary and most of it could be done without but thankfully, even in its base form, the QX70 is still an Infiniti which means you’ll be living in the lap of luxury.

All in all, the QX70 is a model begging for third-generation re-work to match its new name tag but in the meantime it’s still a pretty fine ride.