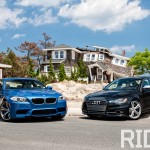 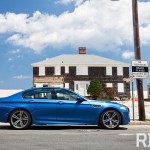 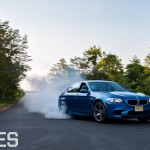 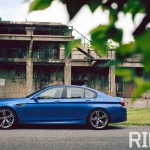 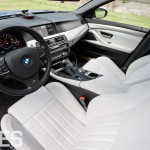 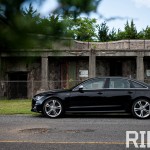 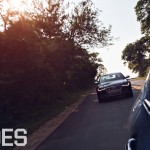 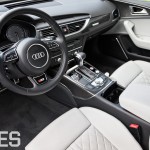 About a year ago, this storm named Sandy came moseying up into New York Harbor. Maybe you heard about it? Hurricane strength, flooded New York, turned Manhattan into a disaster film for the better part of a week?

Well, Sandy didn’t just hammer the fair city that the Yankees, the Knicks, and your favorite car magazine call home. It did a serious number on the beaches and towns along the East Coast, such as Staten Island, Long Island and a stretch of land known as the Jersey Shore. And while NYC is pretty much cleaned up, the repairs and rebuilding down on the Shore still have a long way to go. We at RIDES have a strong bond with the Jersey Shore. It’s where we grew up, where we vacation. So we wanted to remind everyone that while Sandy’s long gone, the damage it left in its wake still lingers. Plus, the Shore was just far enough from our office for us to give the BMW M5 and Audi S6 we had in at the same time a good workout—and see which one comes out on top in this battle of German sports sedans.

Let’s start where everyone does when comparing cars—looks. When it comes to style, the M5 moonwalks away from the S6. (The comparison wasn’t helped by the fact that our M5 wore look-at-me Monte Carlo blue paint, while the S6 was painted oh-hello-I-didn’t-see-you-there black.) The M5 is all bulging wheel wells and diffusers—the automotive equivalent of working out your glamour muscles. The S6 looks like it does a lot of Pilates: sleek and lean but hiding it all underneath its outer layer. If anything, the S6 is too anonymous; it bears a strong resemblance to the A4. Underplaying your hand is one thing, but when your 420-horsepower sedan is easily confused with cars that have half the power and cost half the price, it may be time for a little more panache.

So when it comes to flossin’, the M5 takes the cake. But what about when you need to stunt? Well, here’s where things get interesting. On paper, the Audi looks outclassed—it’s down 130 horsepower and about 100 pound-feet. But the Audi also has two tricks up its sleeve that this BMW lacks. All-wheel drive means it makes the most of its power from a stop, whereas the BMW sends all its Bavarian brawn to the rear axle. With the traction control on, the computer cuts power to lethargic levels; with it off, it takes the grace of a fawn on the accelerator to keep from barbecuing the rear tires.

The other trick up this Audi’s sleeve is its transmission, a dual-clutch wonder that combines the best qualities of an automatic (smooth gear changes, the lack of a clutch pedal) with the best qualities of a racing-style sequential manual (instantaneous gear changes, the ability to shift with the click of a steering wheel–mounted paddle). The end result: Despite the Audi’s power deficit, the two cars are pretty much neck and neck off the line through the quarter.

This advantage, though, applies on a limited basis. See, everywhere else in the world, there’s only one way to buy an M5, and that’s with a seven-speed, dual-clutch ’box. But in America, a small (but apparently vocal) cadre of M5 buyers pouted and stamped their feet and threatened to buy AMGs purely out of spite if BMW didn’t sell them an M5 with a traditional stick shift. So Bimmer yanked the ‘box out of the manual 550i and stuck it in their hot rod sedan.

Apparently they didn’t spend any time making sure the manual M5 could be driven smoothly, because, well, it can’t. When rolling at low speed in second gear, the car herks and jerks like a lowrider on epileptic airbags. It’s almost like BMW made the manual M5 a pain in the ass on purpose: “You want some 19th-century shifter instead of the marvelous gearbox we spent so long working on? Fine, take it. But you won’t like it.”

But you can get used to anything if you live with it long enough. No automatic can ever match the feeling of a hard upshift under power, or of perfectly rev-matching a downshift (though the M5, like the Porsche 911, will do that for you automatically if you want). Who cares if it’s a few tenths slower to 60? It feels faster. The stick suits the car’s macho looks and brute power. You need balls to drive this car; it demands a firm hand on the wheel to push it around, and it rewards those who show it who’s boss.
The S6, in contrast, is almost delicate. You can place it much more easily on the road. It feels light, partly because of the steering, partly because of the thin, well-boosted wheel, and partly because it just is. AWD means oversteer will come, but only if you really want it. The dual-clutch auto will boot along with the best in Sport or hold gears in Manual, but left in automatic, it’ll happily cruise at 1,400 rpm and get 27 mpg while doing it.

And as sensible as that sounds…that’s all the justification we need to declare the M5 the winner. The S6 is, by all rights, the logical choice: It’s cheaper, just as fast, and sucks down less gas. But cars in this performance range aren’t supposed to be about sense; they’re about making you feel glad to be alive, to be healthy, to have weathered the storms that life’s thrown your way and come out on the other side wiser and stronger for it. And that’s something the M5 just does better.

The Bad: People will think you flunked Driver’s Ed.

The Verdict: A little transmission work and it’d be our dream daily driver

The Good: Endless grip, stylish seats, have your fuel-economy cake and eat it too.

The Bad: Quite possibly the most anonymous sports car you can buy

The Verdict: If you have to be responsible, it’s the way to go.