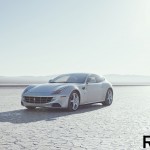 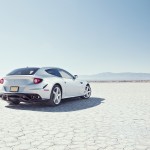 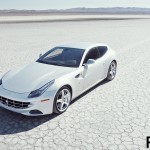 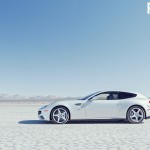 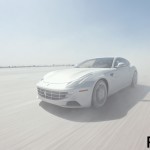 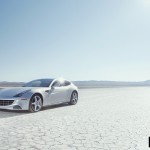 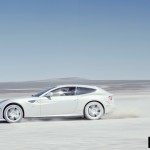 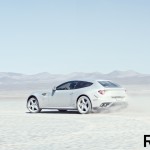 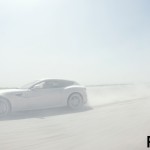 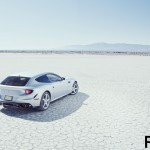 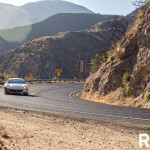 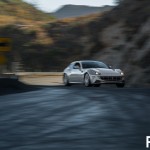 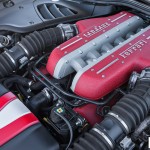 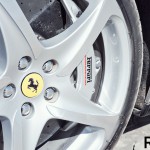 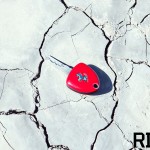 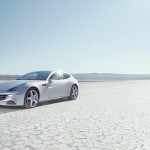 As the sun crested over the horizon—a big, blazing ball of blinding fire that somehow still held my gaze—the pavement was going by in a pre-coffee induced blur, to the sounds of a 651 horsepower V12 humming in seventh gear a few feet in front of my sneakers and the story of how our beautiful passenger once kicked a guy so hard in the groin, his testicle came out. More on that later.

And as I’m driving down one of the straightest, most desolate roads I’ve ever encountered in the southwest Mojave Desert at 5:30am, the early morning sun-bitten lines of the Grigio Abi Dhabi Ferrari FF begin to glow on the hood like a photo beginning to be developed.

The Ferrari FF is odd at first glance. It’s not as sleek or exotic like the rest of the Ferrari family. Is it a coupe, a shooting brake or a BMW M Coupe design study brought back to life? It’s really all of that. The rear is massive. Take your arms and spread them out—it’s that wide. The FF is a big, long car for a reason. With a curb weight of 4145 lbs*, most of that weight is based on the fact there’s four seats, four-wheel drive and a massive V12 out front. But in Ferrari World, weight doesn’t feel like weight. The FF feels as solid as riding a steel I-beam down a bobsled track.

With 53 percent of the weight over the rear axle—the motor sits completely behind the front axle—there’s imperceptible amounts of front end push (understeer). Any dubiousness about whether the AWD would hamper driving was squashed once I pushed the car beyond regular-driving limits. The 4RM all-wheel-drive system (4 Ruote Motrici, which in Italian means, you guessed it, four-wheel drive) has all the goodies: a twin-plate carbon clutch that drives the front wheels independently, torque vectoring and a PTU (power transfer unit), which means power can be directed to each front wheel separately, because of two independent transmissions. The front/rear torque split is 20/80 percent, respectively, and it never feels like the front wheels are hindering performance. It’s a very, very complex system that Ferrari claims is 50 percent lighter than competing systems—and it works perfectly and seamlessly. The system doesn’t work above third gear or at speeds in excess of 124 mph, but that’s inconsequential. Never did I feel the need above 124 mph to rely on AWD, and unless you’re plowing through six inches of powder over 25 mph, neither should you.

As the in-car discussion continued about how certain male *cough* parts were separated from said male’s body, my mind quickly slipped into how the V12 is part of the Ferrari Enzo supercar architecture and more recently (and frequently, in terms of total sales numbers) the 599 GTB. The brand new 6.2-liter V12 in the FF, however, comes with 40 more horsepower than the outgoing 6.0L from the GTB, thanks to a high-pressure GDI system and that increased displacement. The new motor’s impressive torque curve—368 lb.-ft. available from 1,000-8,000rpm, with a peak of 504 lb.-ft.—make sure the weight-laden FF is able to get out of the hole with ease.

Coupled with the 7-speed F1 dual-clutch gearbox, the lightning quick shifts complement the incredibly fast rotating speed of the V12. And the sound produced at the 8,000 rpm redline: enlightening, refreshing, and downright leaves you giddy. It’s like going to a concert for the first time hearing your favorite band, and they exceed your greatest expectations. Why do you drop hundreds of thousands on a Ferrari? Because of this magical thing we call a motor, and Ferrari knows how to make a magical moment better than Walt Disney.

Having most of the controls on the steering wheel, including the performance settings accessible via the manettino dial, is confusing at first, leaving you searching under the wheel for more levers. But after you get used to controlling everything with the flick of a fingertip, it becomes intuitively simple.

Making the left onto the fittingly named Mountain View Road at the crack of dawn, we’re buttoning up our conversation about how Lauryn, our sexy and outspoken model, defended herself as a teenager and made sure the receiving end of her kick made its voice heard. Again, she literally kicked a guy so hard one of his testicles came rolling to a stop on the floor beside him. Moral of story: though beautiful, respect a woman’s wishes. Check.

The thing that really impressed me, and took me by surprise, was the steering. The steering rack is so good and the wheel perfectly sized. Sharp as a katana, you turn, it obliges. The only other time I’ve been wooed by steering (yes, it happens) was in a Porsche, and I didn’t think that feeling would be duplicated again. I knew going in the V12 engine would be my muse in how I anticipated the Ferrari to act. But little did I know the quick and direct inputs would translate into lateral movement as precise as I wanted, thanks to a more direct steering ratio that is 20 percent quicker. My only quibble to this incredible system was the fact that the steering rack was a bit too “light.” Meaning, you didn’t necessarily have to add more force against the wheel to turn more sharply. The consistency of the feedback left a little to be desired. Throw in some more friction against the driver and it’d be perfect.

Braking with the standard, massive 15.6-inch Brembo carbon ceramic is understandably great, but the problem with ceramic brakes is they take time to heat up for optimal performance. So when you’re braking at 160mph on the six-mile-long, speed-limitless dry lake bed with the occasional uneven surface that we took the FF to, you want as much brake feel as possible. Getting squirrely at those speeds is heart-pounding to say the least, though when they heat up to the right temperature, they produce flawless and confident braking without thinking twice. Ceramic brakes are overkill on any car not suited for 500 miles on a racetrack, though they look incredibly cool and offer bragging rights.

With downtime in between shooting video and stills, the Ferrari FF is a comfortable place to sit and relax. Though our test car was dogged (it had almost 10,000 miles on it) from most likely overweight and overzealous journalists that made frequent use of the FF’s cupholders and their own “it’s not mine” mentality, the leather was supple and smelled like the inside of a Tuscan leather jacket. Filled with three occupants plus camera, video and lighting bags, we were still left with plenty of head and leg room. Even Lauryn was hesitant at first—“Great, five in the morning and we have to drive an hour and a half in a Ferrari”—but was surprised at just how comfortable and quiet the FF can be for an extended period of time. Only when you fully release all 651 horsepower does the Ferrari make itself known. There is a hitch: the navigation is based on a Chrysler unit, which feels dated and lowbrow for a machine of this magnitude. But if you listen to the headunit more than the V12, then maybe a Ferrari isn’t for you.

Though this was my first real Ferrari test drive and experience, I won’t lie and say I wasn’t smitten. There’s something about a Ferrari V12. It’s lore in the automotive world—the unicorn. It’s one of the resounding reasons why I got into automotive journalism in the first place. But I was more surprised at how I’d come to love the lines of the FF (granted, it’s not for everyone), the way it drives without any pressure to push 100 percent all the time and how when really pushed, it pushes back just the right amount. Which led me to the conclusion that even though the Ferrari FF may seem soft or toned down to the Ferrari fanatics, internet hecklers and haters alike, at the end of the day the Ferrari FF is like an unassuming and powerful kick to the nuts.