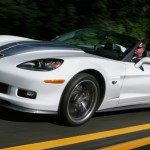 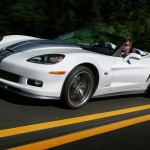 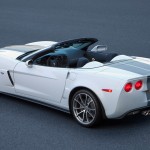 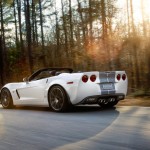 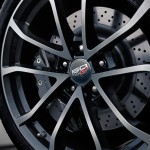 “A four out of six? But I thought the Corvette 427 was the Z06 of convertibles?” Well, yes and no. While the 427 gets that sweet, powerful LS7 V8 beneath the hood, it’s what’s lying under your backside that really dictates what this 60th anniversary ’Vette ’vert will do and proceed to feel like in the process.

Unlike the Z06 coupe, which offers body structure and perimeter frame rails in aluminum—saving weight and offering enhanced stiffness—the 427 comes with hydroformed steel rails that are welded, not bonded like the aforementioned Z06. What exactly does this all mean? It’s like using a butter knife to cut steak: It will get the job done, but not as thoroughly and effortlessly as its coupe kin. This doesn’t mean the 427 moves around like a bag of Skittles; on the contrary, with standard Magnetic Selective Ride Control, the 427 offers 7/10ths of the Z06’s abilities—in the hands of normal folk, more than enough for public consumption.

The best part is still that internal combustion pièce de résistance. In the same way that a pack of wolves is drawn to its next meal, the LS7 begs and begs to chase down the next turn. With lightning reflexes, plenty of grunt down low, lots of stamina up high and 505 horsepower, the hand-assembled mill still produces euphoria, more than six years after its initial release in the Z06.

The Corvette 427 is good. Damn good. And as it’s most likely the last convertible C6 to roll off the assembly line (thanks to the newly released C7), it’s a sendoff that reminds us just why convertibles are here: top down, wind in your hair and that vibrato emanating throughout the cabin.