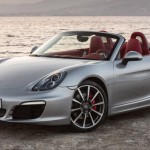 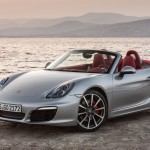 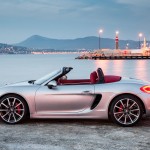 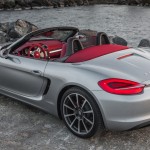 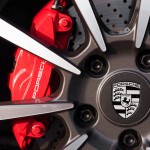 Every car person worth his lug nuts knows the Porsche 911. It’s the iconic German sports car, the one everybody dreams of owning someday. It’s classy, it’s gorgeous, it’s fast. But you wanna know a secret? This writer would rather have a Boxster. [Ed. note: The rest of the RIDES staff does not condone the previous statement.]

Now, that’s assuming I don’t have enough money to go for one of the stuntfest, high-end 911s—your Turbos, your GT3s and so on. But for the price of an entry-level 911, you can pick up a Boxster S with more than 20 stacks of options—and it’s just as fast and just as fun to drive. (Deal with it, Ed.)

With prior generations of Boxster, choosing the lesser Porsche meant accepting a whip that usually looked like a less attractive 911, but the redesigned 2013 model has finally given the Boxster a look all its own. It’s not as clean as the 911’s timeless lines, but it’s sharp, it’s bold, and it’s good-looking—especially with the factory-option 20s jammed into the wheel wells. And while the Boxster’s shorter length and longer wheelbase mean it lacks the 911’s rear seat, it does make for a squatter, more muscular look—a bulldog to the bigger Porsche’s Doberman.

Thanks to its mid-engined layout, the Boxster also offers a handy feature few other cars do: two separate trunks. There’s a narrow, deep one in front and a shallow, broad one in back—which means this little sports car can carry a surprising amount of stuff. That, in turn, makes the Boxster S a damn good road trip car—especially considering it gets 30 mpg on the highway.

Don’t let that get you thinking this car is a poseur’s Porsche, though. Oh, it’ll do things you never dreamed a car could do, entertain you in ways you didn’t think possible. It’s so well put together, and with the way it flows down a road so organically and naturally, you’ll swear it was made just for you. Or better yet, that you were made for each other. It’s an innate quality Porsche manages to infuse into every one of its cars, and the world’s better for it.

See, that’s the beauty of a Porsche: It breaks hearts, track records and speed limits alike with equal ease. The nice thing about the Boxster S, though, is that it gives you even more than you’d expect of all three for your money. Even at a base price of $60K, it’s a bargain. That ain’t something you can say about many cars.

Interior: You can wrap pretty much everything inside in leather—even the rearview mirror. Seriously.

Exterior: Paint it silver, upholster the guts in red leather and drop the top, and this Porsche looks so good, it’ll make you feel like a boss just staring at it.

Floss Factor: You get to tell the garage attendant, “I have the Porsche.”

Flaw Factor: That awkward moment when the garage attendant heads for a 911 and you have to say, “No, no, the Boxster.”