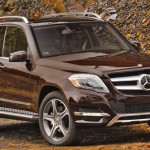 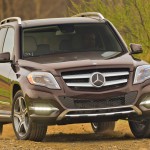 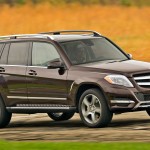 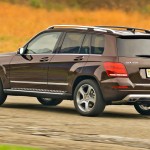 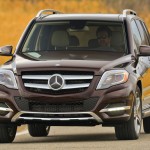 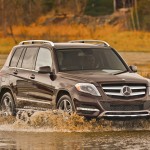 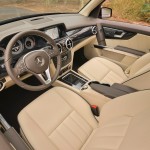 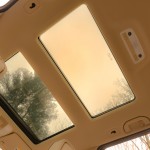 You may not remember this, but Mercedes-Benz was actually the first luxury car maker to jump into the SUV game when they revealed the ML-Class back in 1997. (Actually, they made the G-Wagen for years before that, but it wasn’t sold in the States and was a lot more more truck-like, so for the sake of argument, we’re gonna ignore it for now.) The ML-Class took the suburbs and the streets by storm, kicking off wave after wave of car-like sport-utes from luxury car companies.

It also proved such a cash cow for Mercedes, they brought it back for a second generation…and then a third. And, like any good franchise, the ML-Class (now going by the name M-Class) spawned off a couple side projects: the larger GL-Class and the smaller GLK-Class. With the M-Class’s third-generation released in 2011 and the second-gen GL arriving last year, the time has come for the GLK to score a heavy-duty mid-life refresh.

And the update does a lot for the GLK, cosmetically speaking. The bland, who-stuck-a-Mercedes-logo-on-a-Ford-Escape looks of the first GLKs is wiped away with a tasteful dose of chrome and a more elegant front fascia, along with new LED-accented headlights that call to mind the GL’s eyes. In fact, the image tweaks give the GLK a strong resemblance to the bigger GL-Class—and leaves the M-Class looking a little out of place in comparison.

Inside, the GLK’s been updated as well. From the new steering wheel with its stylish metal spokes to the air vents lifted from the SLS AMG to the beautiful single piece of wood trim stretching across the dash, the GLK not only feels fresher, it feels every bit a Mercedes-Benz. If anybody complains about this “baby Benz’s” interior quality, kick ‘em to the curb—they’re a hater, plain and simple.

But the exterior and interior changes have been around since last summer. The big news for the GLK-Class in 2013 lies under the skin—the new diesel motor sitting in the engine compartment. Other parts of the world have been able to snap up oil-burning GLKs for years, but here in the United States, we’re getting our first crack at one in the form of the GLK250 BlueTEC 4MATIC. A 2.1 liter turbodiesel puts out a modest 200 horsepower, but a bangin’ 369 lb.-ft. of torque.

Now, we want to drop in a quick note on the value of torque. See, horsepower is great for when you really need to haul ass in a hurry—that’s why sports cars and other cars meant to be driven hard and fast pack as much of it as they can. But for real-world driving—pulling hard away from stoplights without revving up ahead of time, merging onto freeways, the sort of driving that doesn’t involve reaching super-legal velocities—diesels do an excellent job. Especially for big vehicles with broad front ends…like trucks and SUVs.

The other nice thing about diesels is how many miles they can log on a tank of fuel. Because diesel fuel has more energy in it per unit of volume than gasoline, a car that runs on it can go more miles per gallon of diesel than the same car could on gas. In the case of the GLK250, the diesel engine means the chunky-looking SUV gets 33 mpg on the highway and 24 mpg around town—about equal with a four-cylinder Honda Accord, and far better than most other similarly priced luxury SUVs. Even the hybrid version of the Audi Q5 can’t match it—while the city mileage is equal, the Audi only gets 30 mpg on the open road.

Any doubts about the diesel actually being able to keep up with this Benz’s needs fade into the rearview with a jab of the gas—whoops, accelerator—pedal. The power rolls on smoothly —diesels generate their go at low rpms, so there’s rarely a delay when you punch it to pass. The diesel produces a little bit of clatter at idle—it’s a trait common to most small diesel engines these days, even in luxury cars—but it’s inaudible above 10 or 15 mph. Other than that, the only time you might feel concerned about pickin’ the oil is when the (rare) time comes that you need to fill up—not every gas station carries diesel.

As for the rest of the drive, well, it’s pretty much just what you’d expect from a Mercedes-Benz SUV: comfortable, quiet and quick. Bumps and other asphalt imperfections melt into the suspension, with only the barest hint of their existence reaching your leather-cushioned tailbones. The chassis feels as solid as the metal they forge into that three-pointed star. Between the tall ride height, the expanses of glass all around you and the way the hood seems to drop off into the road, piloting the GLK feels less like driving and more like floating down the road on a throne.

If the GLK has a flaw, it’s in the steering wheel. It handles fine—in fact, we were impressed by how well it tacked into a corner once the GLK found its line—but there’s so much play and so little feel in the steering, finding that line takes some experience. The Benz’s steering is light, almost to the point of feeling disconnected; you wonder if something may have popped out of place somewhere between your mitts and the front wheels. Then again, we hear that’s how Mercedes-Benz SUV buyers like their steering, so who are we to judge?

‘Cause like it or not, the GLK250 BlueTEC isn’t made for carving up canyons or owning autobahns—it’s made for handling any road in any weather, in style and comfort—and at “normal” speeds. That’s a task it does exceedingly well. If you’re thinking about picking up a little luxo-SUV, you’d do yourself a disservice if you don’t drive the GLK—and don’t be afraid to try the taste of diesel.