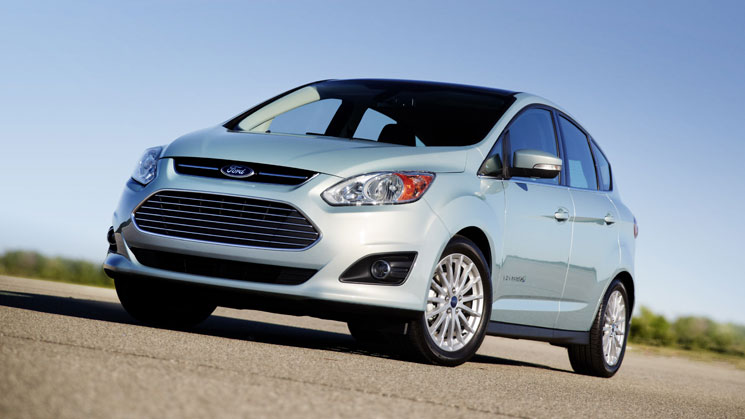 We had to make a last-minute trip from the RIDES headquarters in NYC to Cincinnatti, Ohio to meet our friends at Spade Kreations for a photo shoot (Want to see it? Check out the cover and full-feature of JUNE 2013 RIDES Magazine). That’s about 650 miles one-way, so we needed a whip with exceptional gas mileage and plenty of interior space for all our photography equipment. Typically, good gas mileage and big cars don’t mix, but we found something new that happened to be exactly what we needed—the C-MAX.

Though it’s new to the U.S., Ford has been diligently perfecting the C-MAX over the last decade in other parts of the world. During our ten-hour drive to Cincinnati (and ten hours back), we analyzed the car’s looks and performance. At first glance, the exterior definitely looks clean and slim, but not excessively aerodynamic or stylish. It looks like a European car—small and fit—to maximize efficiency, so don’t scope-out the C-MAX through the lens of high speed ability or off-road capability. It’s in its own category.

The 2.0L hybrid electric powertrain with electronically controlled continuously variable transmission (eCVT) packs enough punch to have you forgetting it’s a hybrid. We know, 141hp is relatively low and hybrids aren’t usually mentioned when talking about sports cars, but trust us, you’ll forget the low numbers right away.

The exterior isn’t anything jaw-droppingly amazing, but the interior makes up for it by far. Like we mentioned earlier, C-MAX is built for practical purposes, and it delivers. The interior is loaded with hidden storage compartments and some of the best use of ambient lighting we’ve seen in a while. We found storage compartments everywhere; in the center console, overhead, in the doors, even in the floor! There’s lighting that comes from the footwells, door panels, cupholders and glovebox. The color of light is also adjustable. With that much control over color, intensity, and lighting anyone will find the perfect fit for them – including people who get headaches from light during night drives. It’s really cool.

One thing we noticed though, is how sweet the upgraded Sony Audio System is in this whip. Nine really nice speakers and 100 watts of power produce clear sound with deep bass, and virtually no distortion. We highly recommend paying a few extra dead presidents for the sound system, because it’s the icing on the C-MAX cake.

The outside looks are average, the inside is ahead of its time, and the engine performance is pleasantly efficient. If you plan on driving a long way a lot, or just want something to use around town, the 2013 Ford C-MAX is awesome.

Interior: Ambient lighting has never had such an intense impact for passengers (in a really good way), especially during very long drives. The C-MAX gives ambient lighting a whole new meaning.

Exterior: Looks like the familiar Ford we know and love, but this one has a European twist to it – slim and fit.

Floss Factor: The gallons of gas saved – what a relief.

Flaw Factor: The GPS tweaked out once in a while, indicating that we were driving on a different road than we were actually on.