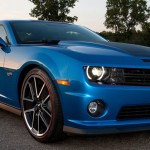 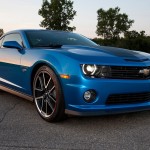 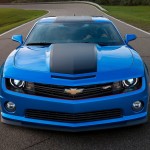 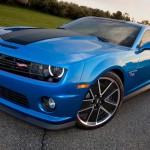 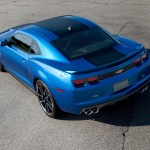 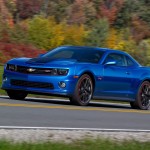 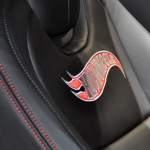 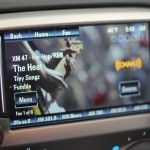 Let’s get the elephant out of the room before we go on: The Hot Wheels Camaro is taaaaacky. The Hot Wheels badges scattered across the car are as cheesy as a good Super Bowl dip. Those little red badges pop up like pimples all over the car: under the chrome CAMARO logos behind the front wheels, just to the left of the right headlamp, on the top right of the car’s squared-off ass. Those ones, though, you could probably pop off without too much trouble. No such luck with the VHS-sized logos embroidered into the front buckets, though. And the rims…well, ever heard anybody grab a Hot Wheels car off the rack in the Walmart toy aisle and say, “Man, I love these wheels?” No. Because the wheels that come on every $1 Hot Wheels car are gross. And they don’t look much better life-size, either.

Which is a shame, because if you can look past the tacky badges, the Hot Wheels ‘Maro may just be the freshest member of the Camaro lineup (assuming you leave out any Camaros with a Z in their names). The Kinetic Blue Metallic paint with matte black accents is fresh enough to draw wolf-whistles—and it only comes on the Hot Wheels edition. Those ugly rims are 21s, one inch larger than Chevy offers stock on other Camaro SS models—and, y’know, a little powder-coating would probably go a long way towards making them look better.

Chevrolet offers the Hot Wheels option package—which runs ya $6,995, in case you were wondering—on 2LT and 2SS models, also known as the higher-end V6- and V8-powered versions. If you’re just looking to floss around town, the V6’ll do fine by you, and you’ll even get 30 mpg on the highway. But we’d argue that you’d be missing the point of the Camaro. The 426 horsepower, 6.2 liter V8 is a work of modern American art; if Indiana Jones drove the SS, he’d quickly declare that it belongs in a museum. Turn off the traction control, and this ride spits hot rubber with ease. And if whipping donuts and doing burnouts isn’t at least a third of the reason you want a Camaro, well, we suggest you take a long, hard look at your priorities.

As a 2013 model year Camaro, the Hot Wheels car is a particularly nice place to spend some time inside. Those embroidered seats are actually damn comfy—and, when you’re sitting in them, you can’t see those garish logos. The revised-for-‘13 center stack is built around the touchscreen display for Chevy’s MyLink infotainment system—one of the better-designed members of the current crop of in-car computer displays. The combination of the crisp color touchscreen next to squared-off retro gauges is what the Camaro is about in a glance—merging the best of the old and the new.

Which is what the Hot Wheels Camaro is meant to do, in a slightly different way. It’s a toy for grown-ups—a way for people to bridge the gap between the playtime of their youth with the needs of their adult years. Playing with Hot Wheels cars stops being acceptable at around age 10. Luckily, the Camaro—Hot Wheels edition or otherwise—picks up the slack from age 16 on. Now, anyone have a prybar we could borrow?