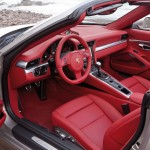 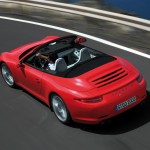 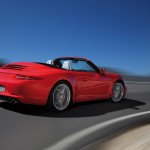 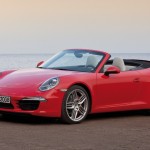 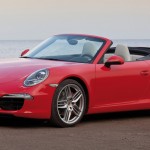 “Classic” is not the word you’d use to describe most new cars, but the Porsche 911 Carrera S Cabriolet is just that. While many other makes rely on bells and whistles to sell, Porsche relies on their performance and sleek, timeless look. Like its predecessors, the engine is housed in the rear, where the 3.8-liter, six-cylinder, 400hp beauty is capable of producing a top speed of 185 mph…with the top down. You’d need a real heavy foot to ever achieve that speed, but you’d be surprised how much heavier your foot is when you’re behind the wheel.

Though the outside keeps the classic Porsche curves, the inside has been updated to fit the needs of the modern driver. The most impressive feature of the interior is the ease with which you can adjust the drivability of the car. A button cluster surrounding the gear-shift lever allows you to put the car in Sport or Sport Plus, which opens the baffles on the exhaust and lets the ass end kick out with more frequency. Nestled between the extremes of normal and Sport Plus lies Sport, which provides the best drive in city conditions. Altering the suspension and exhaust, and disabling auto start/stop, gives you close to the same performance as Sport Plus, but where Sport excels in the city is in adjusting the automatic shift speeds. Sport shifts much sooner in the automatic setting, meaning much easier starting and stopping in traffic without having to work the paddles.

Even with the top down and the sick Burmester speakers drowning out the wind and exhaust on the open road, Martin Lawrence’s voice kept resonating in my head—“$80,000 for this car and you ain’t got no damn cup holder?” While this Porsche does have cup holders and is far more expensive than Will Smith’s car in Bad Boys, it does feel like the technology is lacking. Porsche has never been known to be ahead of the curve with its in-car technology, but the mapping software and stereo setup is beginning to teeter on dated. Given that cars are built to be driven and not to drive you, we’d say you should be more concerned about the police than the navigation as you unknowingly near triple digits.

Interior: There’s room for two people with arguably up to two “6-year-olds” in the backseat, if you ask around the RIDES office. Play it safe and stick to you and your girl only.

Exterior: The smooth lines and bubbly exterior scream Porsche. That is, after all, a big part of the reason you’re buying it.

Floss Factor: If you feel like waking the neighbors, select Sport Plus, rev it and let the exhaust do the rest.

Flaw Factor: It’s a shame Porsche has yet to take a cue from their brethren at Audi and incorporate Google Maps.