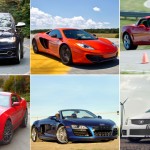 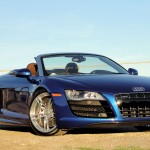 Is there anything not to love about the Audi R8? Not only is it cheaper than the Lamborghini Gallardo it’s based on, it’s better looking—even in Spyder form, which loses the coupe’s stunning silhouette and ginsu side blades. The gated manual—which will probably be phased out in the next couple years—is easy to drive in heavy traffic, yet offers the purest of control. The V8 model has plenty of power, but if you can, the potent V10 is by far the way to go. We don’t smoke, but after one long drive through the hills of Southern California on a sunny afternoon, we suddenly understood why people reach for a cigarette after sex. —WSC 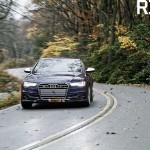 Every time we think the German super-sedan game has reached a good leveling-off point, one car company or another finds a way to push it even higher. The new Audi S6 doesn’t raise the game by setting new records for horsepower—though we do suspect its 4.0 liter twin-turbo V8 makes more than the claimed 420 horses—but it pulls as hard as sedans and sports cars with far more power, and has one of the most balanced four-door chassis we’ve ever dealt with. We set new personal top speeds on some of our favorite country back roads in it—and that was on wet, leafy autumn asphalt. Best of all, it’s about $20K less than the M5 and E63 AMG. —WSC 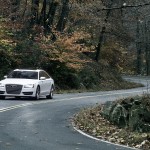 Big, powerful, stealthy, suave and refined, the S8 is now more powerful at 520 horsepower, faster with 0-60 coming in 3.9 seconds and sleeker thanks to subtle exterior revisions. Never has going so fast ended with smiles and a softened back thanks to seat massagers. Adaptive air suspension allows driving dynamics to conform to your mood, altering performance with the toggle of the MMI switchgear and intuitive menus in the always elegant cabin. It’s hard to argue with a car you could live with everyday and still smoke 90-percent of the automotive landscape. —MC 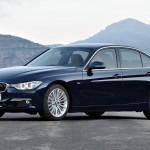 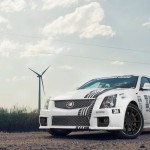 Even if it hadn’t taken us across the country during this year’s Gumball 3000, the CTS-V would still be on this list. But the grueling Gumball showed us yet again just how astounding this Caddy is. Even loaded down with about 800 pounds of staff and gear, the CTS-V wagon was still able to keep up with GT-Rs, Gallardos and pretty much every other car short of a Veyron. It is truly a supercar—not in the traditional sense, in the sense that it may have been created on the planet Krypton and developed super powers under Earth’s yellow sun. —WSC 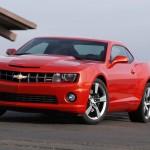 As soon as you step into a new Camaro, it finally feels like a place where 40 large will get you. A trick no-frame rearview mirror cleans up the retro-inspired interior (and makes us wonder why all cars don’t have mirrors so classy), while a Corvette-based HUD (heads-up display) keeps all the engine vitals right in front of you. And looky here, an actual six-speed manual that snicks and clicks its way to whatever gear you want that 426-horsepower V8 to engage. —MC 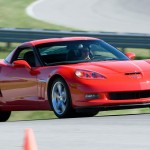 Think “Corvette,” and your mind may fly to a realm of gold chains and midlife crises. If it does, though, you need to change that—because the Corvette has grown into a true world-class performance machine. The Grand Sport trim is the value seeker’s choice; it adds a widebody kit, the suspension and brakes from the hotter Z06, improved aerodynamics and new wheels and tires, along with plenty of smaller performance improvements. Granted, the cabin is still a little low-rent, but try and find a car that’s faster or more fun for that kind of money. You’ll be a while. —WSC 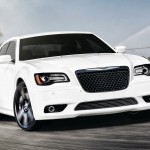 It’s got a Hemi. It also has refinement that is toying with the German luxury brands: Audi, Mercedes and BMW. You can be carted around town as an exec or slid around the next corner like a drifter, whichever the preferred method of showmanship; the 300C combines great attributes in a luxury sedan, the perfect guise for all your getaway type fantasies. —MC 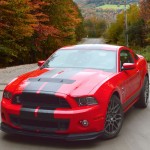 The Shelby may not look all that new, but with Mustangs, it’s under the hood that counts, and it’s the latest GT500’s engine that made us fall in love with it: a supercharged 5.8 liter V8 that pumps out 662 horsepower and TK pound-feet of torque. In a sports car, those figures would be potent. In a muscle car—at its core, a budget-priced compact with a live rear axle—they’re downright seismic. And it’s because it’s so overpowered that it’s so much fun to drive. Add in an iconic rendition of the beloved Mustang body shape that literally draws more love from bystanders than any other car we’ve ever driven, and the 2013 GT500 earns a spot on our favorite cars of the year…if not all time. —WSC 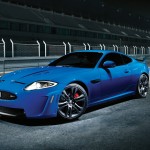 Two words: live wire. The Jag is the Bambi On Ice of sports cars. It scares the shit out you when you prod the accelerator, but damn, it feels good. And that engine note is next level. No artificial sound producers here, the XKR-S crackles, snarls and sounds vicious thanks to its blown 5.0L V8 and a penchant for making love to ears everywhere. Use caution when trying to tame this 550hp hellish beast, cause extracting all of its performance is almost impossible. —MC 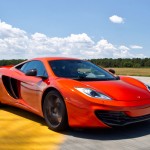 Ah, the McLaren. If you asked us to name the most extraordinary car we’ve driven this year, it’d be the McLaren. Never in our lives have we driven something with the performance, the handling, the supernatural abilities of the MP4-12C. It feels like something from the future that citizens of today just can’t wrap our heads around, like an iPhone would have been to someone in 1963. It moves as though it’s exempt from the laws of physics—as though instead of moving through the world, it bends space and time around itself. It sounds like hyperbole, but only until you’ve driven down an empty country road at four times the recommended speed limit. (Which, for the record, we don’t advocate.) If you ever have the chance to drive an MP4-12C, take it. It might just change your life. —WSC 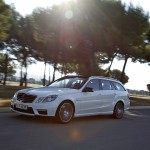 When you want to get around, have a ton of interior real estate and still feel like the boss, the E63 Wagon provides it all: Tire smokin’, cargo holding, highway eating son of a bitch with all the comforts of a Mercedes and all the power of a NASCAR stocker. If you’re not a fan of wagons, this will make you reconsider. Besides, we’re always looking for a good excuse for a turbocharged wagon, right? —MC 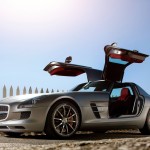 The SLS AMG is that rare car that, even at two hundred grand, seems like a bargain. Few other whips in its price range look nearly as exotic, even before you pop the vertically-opening doors that make you feel like a movie star every time you climb out of them. It goes as well as it shows off, too; the 6.2 liter naturally aspirated V8 is the best motor AMG’s ever made. The SLS accelerates and turns like a fighter jet, and because it’s a Mercedes, it’s still comfortable enough to drive across the country. Consider it a whip that’s equally capable stuntin’ and flossin’—a world-class sports car fit for rappers and racing drivers alike. —WSC 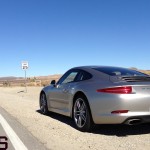 I’ve always had a fascination with Porsches. Having turned wrenches on them in my adolescent years and then finding out (the hard way) about their rear engine tendencies, they’ve always held a spot in my heart. The latest iteration of the 911 makes finding faults utterly impossible. Every generation gets better to drive as a daily sports car: it’s like having sex, you just get better with age. While the 7-speed PDK is flawlessly smooth, the 7-speed manual is where I’d rather spend my time, though; it takes a bit getting used to the shifter’s action—where you can occasionally miss a shift here and there. —MC 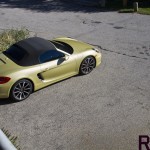 Never would I choose a convertible over a fixed roof. However, the Boxster makes a valid argument of why the entry level Porsche might be considered the best affordable sports car out now, and ever. The trickle down effect from years and years of maturing the older brother 911 have buttoned up the chassis, motor and drivetrain, and with a few modifications, you can easily surpass a 911 S for less money. —MC 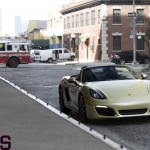 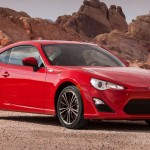 If you’re still looking for that fun-to-drive sports car and you can’t stretch to the Corvette Grand Sport, we recommend Scion’s bargain-basement coupe. Its boxer four motor is pretty wimpy, but the car’s light enough that 200 horses and 151 lb-ft move it with plenty of alacrity—and it’s low enough to the ground that 60 mph feels like 80. Being low-slung means it handles like a gazelle trained as an NFL running back, but Scion wisely outfitted it with family sedan tires to make it easier to drift. The result is a car that’s cheap to buy, cheap to run, and more fun than a water-powered jetpack. —WSC 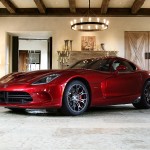 If the Viper had a declaration of what it was here to do: rough, rugged and raw would be its motto. Now wearing a veil of electronic aids, there’s still a hemorrhaging meth head beneath waiting to get high. The Viper GTS adds two-mode suspension, while the SRT with the track package is the best, and lightest if you’re looking for a serious monster. Add an improved interior, a sexy new exterior and you can be complacent in the knowledge you have one of the best sports cars out. —MC 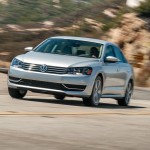 Always having believed in diesel, I never pictured myself actively thinking about buying one. However, after spending a long stint in the almost-800-miles-to-a-tank Passat, snatching one up to save a grip of cash doesn’t sound all that bad. Not fast by any means, it still has decent pickup and torque, but overwhelms with a comfortable cabin, easy to drive nature and seriously surprising amount of space to stow. Not a bad deal for under $35k. —MC

Every year, we at RIDES are lucky enough to drive dozens upon dozens of new cars. Now, when you drive that many whips, a lot of them tend to blend together in your mind, but there are always a few that really make a lasting impression. This year, though, there was a bumper crop. We narrowed it down to 18, but we could have easily done more. Check out the list in the gallery above.