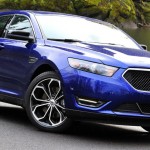 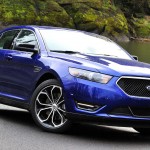 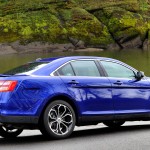 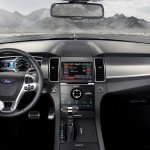 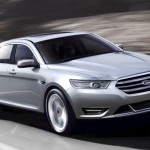 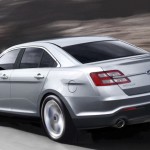 The current Taurus has been around for a minute—it debuted back in 2010, replacing a model whose most notable trait was that it was completely invisible, even in plain sight—but it still looks fine, especially after a 2012 mid-cycle styling refresh. And the best-looking Taurus by far is the SHO. With a mesh grille up front that brings to mind Superman’s logo, darkened headlamps, and 19” or 20” rims (our car rocked the 20s), the Taurus SHO looks ready to kick some highway and byway ass. For a family sedan, this thing has presence.

The SHO backs up that visual muscle with some actual muscle, too—a twin-turbocharged 3.5 liter V6 that spits out 365 horsepower and 350 lb-ft of torque. Connected to all four wheels through a six-speed automatic, this powertrain means the tough Taurus will grip and go like an honest-to-God sports car—though if you plan on hustlin’, you’ll be best off using the steering wheel paddles to take manual control of the tranny, ‘cause your brain’s a better judge of when to shift than this transmission.

Inside, the Taurus isn’t quite as roomy as you’d expect, given its old-school proportions—or maybe that’s just how it feels on account of doors that position the bottom of the windows about even with the driver’s ears. Still, it’s big enough to fit four in comfort, with leather seats that feel as comfortable as any chair made by La-Z-Boy. (Plus, the ones in front heated and cooled on our tester, which we always appreciate.)

Ford’s been playing a full-court-press in the ICE game lately, and the SHO we borrowed for a week had both of Ford’s big electronic guns: SYNC and MyFord Touch. A broad color touch-screen controls pretty much everything from climate controls to the stereo to the navigation system, with voice-activated backup commands in case you don’t wanna take your hands off the wheel. And you’ll probably end up using them every now and again; while the touchscreen looks classy, colorful and clean, all the menus look very similar, and the lack of hard buttons means it’s almost impossible to change anything without taking your eyes off the road a hair longer than you’d like.

But if you can get used to the infotainment system, the Taurus SHO makes for one solid four-door whip that, despite its twin turbo V6, actually makes for a pretty solid 21st century new-school muscle sedan. If everyone on your block is rockin’ Chargers and 300s, try something different—try Taurus.

When told I would be driving a Ford Taurus I was confused as to why RIDES had rented a car for me, given it’s a staple in every rental fleet. As it would turn out the 2013 Ford Taurus Limited was not a rental at all; in fact, it was far from it.

The Taurus will never be a showstopper, but as Ford continues to get the Jaguar out of their system it’s headed in that direction. Ultimately it remains a sedan built to get you from A to B safely with style and comfort. With that criteria established, the Taurus Limited more than exceeded my expectations. A leather interior makes for a nice change of pace from the cloth ones you’d spend more time un-bunching your clothes from than relaxing in, and with seat heaters and coolers, you will be relaxed. To ensure that you aren’t lulled to sleep in the plush seats, the Taurus Limited comes with the optional Sony audio system. Plug in your iPhone and control it from the MyFord Touch or with the SYNC voice-activated system and you’re ready to test the limits of the 12-speaker system.

At 80 mph on the freeway with the windows down the speakers hold their own, but more impressively, the Taurus does as well, easily overtaking those opting to abide by the suggested speed limits and hang with those a little more heavy-footed driving BMWs and Benzes. At about two tons the car is not light, but you would never notice, with such smooth responsiveness to every maneuver you throw at her.

The Taurus Limited is a great buy starting at $33,000 for those looking for something solid to strap a car seat into. If you’re looking for flash, though, this Ford is still years off.