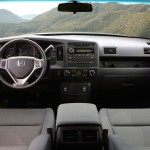 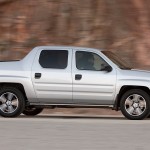 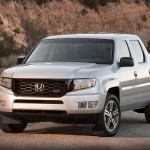 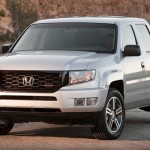 Here in the States, big trucks have always been a domestic carmaker’s game. Nissan and Toyota have both tried throwing their hats into the ring, but neither the Titan nor the Tundra has ever found the kind of success that Dodge, Ford and General Motors have. All the ingredients are there—big V8, body-on-frame construction, full-size bed—yet the Japanese trucks just can’t seem to find their place.

So when it came time to make their way into the American truck market, Honda went with a different tactic. They took the same unibody chassis that the Pilot SUV and Odyssey minivan use and built a quad-cab pickup body around it. Four doors, a short bed and a V6—that’s the only way it comes.

And the surprising thing is it works. Not for heavy-duty pickup tasks like hard-core off-roading or big-time hauling, but for the things 75 percent of pickup buyers ask of their trucks—tasks like Home Depot runs, helping friends move, towing a car or driving down to the salvage yard to cop old car parts—the Ridgeline does just fine. But unlike plenty of full-size trucks out there, it also excels at doing what cars do too. The lockable trunk hidden beneath the rear of the bed lets you store items out of view (as long as you haven’t already filled the bed with stuff), and the unibody design means minimal squeaks and rattles.

If the Ridgeline has a flaw, though, it’s that it’s getting awfully long in the tooth. Honda started cranking them out in early 2005, and updates have been few and far between since then. The V6/five-speed automatic combo is underpowered for this day and age, yet gas mileage—usually a Honda strong suit—is no better than far more powerful trucks like the Ford F-150 with the EcoBoost engine. The interior is straight outta 2005, too; hop inside and it’s like being transported straight back to the summer that The 40-Year-Old Virgin came out. There’s no iPod hookup, there’s an old-school Casio-spec LCD display for the radio, and the whole interior seems like it was thrown together during an all-nighter because the designers wasted the months prior playing Xbox all day. Well, consider it a prime candidate for some aftermarket personalization

Interior: Between the upright seat that’s all up on top of the steering wheel and the high seating position, sitting inside this Honda feels kind of like driving a bus.

Exterior: The Sport Package adds on a blacked-out mesh grille, black-accented rims and black headlight surrounds—which make it the best-looking of the whole Ridgeline pack.

Floss Factor: The tailgate opens from the bottom and from the side—the better to access the trunk beneath the bed. Clever touch.

Flaw Factor: While your boys are driving real trucks…you’ll be tooling around in a whip based off a minivan. A minivan.