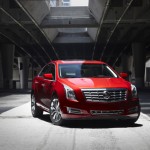 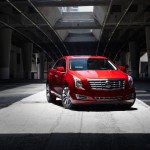 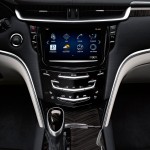 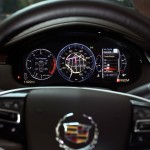 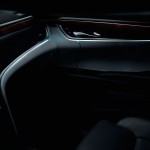 All hail the new king of the Cadillacs! The CTS-V may be faster and the Escalade may be bigger (and they may both be pricier), but the Cadillac XTS is the new ruler of General Motors’ luxury family—the flagship of the brand. And as the flagship, it’s the XTS’s job to wow the public by showing the world just what Cadillac is all about: style, luxury and technology.

So let’s start with style, because that’s something the XTS has by the truckload. Its long, sleek lines channel the Sixteen concept car that rocked the Detroit Auto Show back in 2003; you can’t help but stare at it when it crosses your path. It looks futuristic and important—the kind of ride Michael Bay would tap for a starring role in his next sci-fi blockbuster. It’s a hundred times more stylish than the deceased DTS it replaces. Pull up in a DTS and people will wonder how much Avis charges you per day; pull up in the XTS and people will wonder which Victoria’s Secret model will climb out of the back. It’s that hot.

The XTS bumps Cadillac’s luxury game to the next level, as well. The interior is up to Mercedes-Benz standards (and that’s a huge compliment), with supple leather and other fine materials cladding just about every surface. Between the expanse of room and the abundance of natural light flooding in, the cabin seems as big as a national park, whether you’re riding up front or in back. And thanks to Cadillac’s still revolutionary magnetic suspension technology, it rides as smooth as polished ice. But if you feel the need for something sportier, bump the shift lever to sport mode, and the suspension and steering firm right up. It’s no sport sedan, but it hustles.

However, it’s the technology department where the XTS really seeks to set itself apart, and all it takes is one look at the all-touchscreen infotainment system, which Cadillac calls CUE, to see just how strong their electronics game is. Actually, make that one touch—because while there are plenty of cars out there with touchscreens, the XTS offers haptic feedback. What’s that mean? Press a button, and while nothing actually moves, the glass vibrates. No more wondering if you successfully hit it or not. Not crazy enough for you? This Caddy also tells you if you’re accidentally rolling over the lane markers, not with a light or a sound but by vibrating one side or the other of the driver’s seat. It’s clever, cool and seems straight outta tomorrow—just like the XTS itself.

Interior: Hover your hand over the center console’s screen and control buttons appear on the display; move your hand away and the buttons vanish, so the screen can maintain a clean look.

Exterior: Stock rims in 19- and 20-inch look good, but there’s room for something bigger in those wheel wells, and we’re waiting for you to get your hands on them.

Floss Factor: Each XTS comes with a new iPad to help buyers get used to the car’s CUE system. This, in theory, should cut down on distracted-driving accidents.

Flaw Factor: The 304hp V6 is the only engine available—at least for the moment. But GM has implied there are other motors to come…