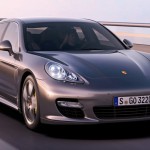 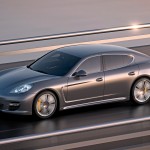 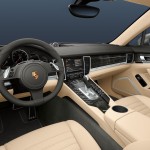 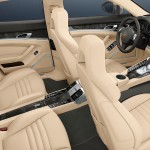 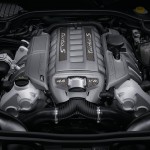 Initially, the Porsche Panamera caused, let’s say, a commotion in the car world because of its unorthodox styling and because it’s a Porsche (actually, a lack thereof, the “purists” said) sedan. But since its introduction in 2009, the Panamera has surpassed all expectations. Sure, it still takes some getting used to, and you might think the rear is alien-esque, but the Panamera is a true Porsche, and you need to get in the driver’s seat—or, in the case of the Panamera Turbo S, those two beautiful rear buckets.

The first thing that amazes about this people-moving rocket is how, with the push of a few buttons, the character of this sedan changes from limo to land-speed record. It’s as tame as a kitten around town with every system in its normal mode; shifts are imperceptible, acceleration is telepathic and the ride is sublime. However, once the true nature of this 550hp leviathan is put to use, you can expect your facial muscles to contort in ways not possible in other rides. Activating Sport Plus mode truly alters the character, and once your right foot does the talking, the Turbo S speaks volumes. If you still had any doubts about the performance, all you need to do is complete a few simple steps: Engage Sport Plus, shift over into manual mode, stomp your left foot on the brake and your right on the gas (which activates launch control), release the brake and hold on. You can repeatedly do zero to 60 in 3.6 seconds.

It would be one thing for a sedan to go fast—look to any Mercedes or BMW for that—but the area this Porsche truly shines in is going fast and becoming docile when you’re carting around three other lucky passengers. Opting for the rear comfort seats (eight-way adjustment and ventilation) means that not only will passengers want to be shining with you, but they’ll beg to stay. And with the optional 16-speaker, 1,000-watt Burmester audio system, there’s no better place to spend a long afternoon drive.

The multitude of options, buttons and switches make for personalization on a higher level. It may seem overwhelming at first, but once you master the layout of the Panamera, your hand seems to effortlessly glide to where it needs to be.

Porsche may never again be seen as a sports-car-only company, but if they want to build other amazing vehicles that help finance their operations, who’s to question them when they build unflappable vehicles like the Panamera Turbo S?

Interior: The central-mounted rpm gauge and left-handed ignition switch clearly mean it’s a Porsche, though we wish there was a spot for the key fob.

Exterior: It’s not the most beautiful chick at the party, but it’s the heart that counts, right? The front is as unmistakable as the rear, though not nearly as pretty.

Floss Factor: On the Turbo versions, a trick spoiler does a ballet of mechanical wizardry. You’re going to want to keep pushing it to watch it again and again.