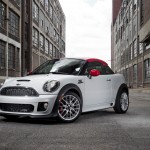 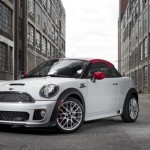 n recent years, there has been a boom in micro-cars from smart to Fiat; however, it all began over a decade ago when MINI landed stateside. Though initially known to many as “The Italian Job car,” it has left that moniker in the dust, creating an identity all its own, with the JCW Cooper Coupe leading the way.

When you’re at the wheel, it becomes instantly clear that, while size and fuel economy may rule public opinion in the micro market, it’s the racing heritage of John Cooper that dominates this coupe. Packing a twin-scroll, turbocharged engine generating 208hp and 192 lb.-ft. of torque into the pint-size roadster gives it some real power off the line—87hp and 78 lb.-ft. more than its base counterpart. Combine that with the quicker acceleration from the standard six-speed manual transmission and you’re bound to overtake most. And with a top speed of 149 mph, it’s no slouch on the open road, either.

Performance takes top billing, but this coupe is no eyesore, with curves that would leave Beyoncé with something to be desired and standard 17-inch alloy wheels (with 18-inch optional). The outside is hot, but we know what’s inside counts for something too. When the Brembo brakes slow your roll, you’ll find the interior very quiet, until you turn up the 10-speaker Harman-Kardon system. The only downside to the interior is the lack of space. Granted, you aren’t hauling everything you own in it, but it’d be nice to fit a person and a duffel bag without having to use the trunk (presumably for the bag).