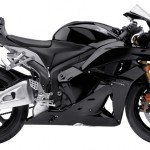 Maybe you’re into big ol’ hogs, or maybe you just want a bike to get you from A to B in style. But for those who love the sheer rush of speed and performance, sport bikes are the ticket—especially Honda’s CBR600RR.

The 600RR falls into the “legendary” category, with dozens of championships under its belt. It’s a middleweight bike with constantly updated technology and a bulletproof motor. With dropped handlebars and a hunched seating position, it’s not the best on a road trip, but if you want to carve through canyons with ease and look good doing it, this 410-pound, 110-horsepower motorcycle is one of the best.

If there’s one characteristic about the CBR600RR that sets it above its competitors, it’s the confidence it inspires in the rider. Honda’s Electronic Steering Damper is the best in the industry; it adds to how balanced the 600RR becomes once you start hustling. The bike is so good, you barely need any seat time to understand how it works and how it’s meant to be ridden. Pair that with the combined antilock brakes and you’ve got a bike that’s every bit as smart as it is fast.

There is nothing out there that can provide the rush of a bike like this. Pinning the throttle wide open in second gear will bring you to 90 mph in seconds, with effortless upshifts and a ride quality that’s second to none. It takes willpower to slow yourself down and bring you back to reality. The CBR600RR is the product of a company that knows what they’re doing, and the result of a formula that’s proven to work better and better with slight tweaks as the years go on. For the money, it’s unlikely you’d find something more capable on two wheels.