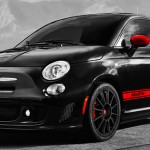 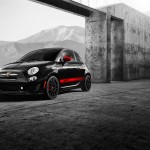 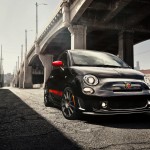 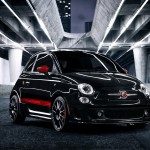 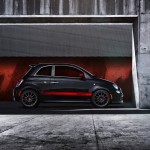 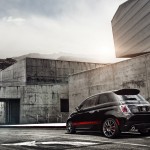 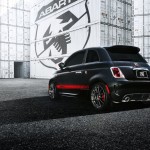 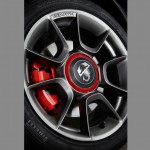 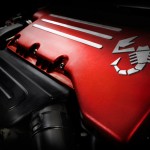 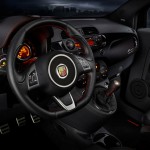 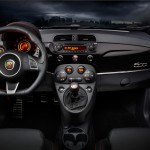 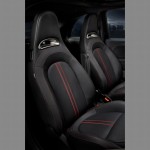 The ever-so-adorable Fiat 500 may have made a big splash with your girlfriend when she saw J.Lo pulling her best Beyoncé-on-Adderall dance moves, but it’s certainly not the ladies that Fiat have in mind with their Abarth. No, it’s pretty clear that with its diminutive tuner, Fiat is courting those with an eager eye on the track.

Lucky for all the customizers out there, the cinquecento already has showrooms full of aftermarket products ready for your personal individualization. Seeing as the new 500 has existed in Europe since 2008, the Abarth enters the U.S. market with an arsenal of aftermarket products at the ready. But the truth of the matter is, the 2012 U.S. Abarth is so spritely and aggressive out of the box that there’s very little you’ll be tempted to toy with. First off, its 1.4-liter SOHC 16-valve four-banger gets turbocharged, increasing horsepower by a remarkable 58 percent (from 101 to 160hp), while boosting torque by more than 70 percent, up to 170 lb.-ft. That’s considerably more than the Euro version, which only gets 130 horses. But that increase in power would be useless without work done on the 500’s suspension, which has a tendency to roll and understeer in base models. Via an added rear sway bar and a lowered front end (by 15 mm), the Abarth engineers tightened suspension by 40 percent. The steering ratio is also sharpened. And by employing Sport mode while diminishing the traction control (which you can also completely turn off), the Abarth feels like a legitimate track car.

For now, only a five-speed manual is available, which is, frankly, a bulls-eye; in a tiny car like this, there’s a great thrill from grabbing a hold of the short thrower and hammering home shifts while listening to the exhaust wail and gnash. The Abarth succeeds excellently in creating a visceral experience of true sport that works in a symphony of sensory triggers—the grip of the thick steering wheel, the euphonic growl from the pipes, the Pirellis digging into the asphalt as you power into a tight corner. The Abarth can handle almost anything you throw at it in a track situation, and for 22 Gs, you’d be hard-pressed to find anything with as much performing capability.

Interior: The insides also get a performance face-lift, starting with the contrast-stitched, heavily bolstered seats. Driving experience and aesthetics are enhanced via the leather-wrapped, three-spoke, flat-bottomed steering wheel. A new turbo gauge with shift light is added to the dash too. Pimp!

Exterior: The already gorgeous lines get angry, highlighted by a modified fascia that adds twin intercooler inlets under the headlamps, a larger rear wing over the hatch, 17-inch forged aluminum wheels, a dropped stance and numerous sinister Scorpion badges.

Floss Factor: The exhaust note is intoxicating—every customer gets a full day at an Abarth Driving Experience academy. Its 28/34 mpg belies a thrilling drive.

Flaw Factor: No integrated screen for navi or entertainment; instead, a chromed hole for an optional $400 TomTom navigation unit decorates the dash—a standard unit would be nice.