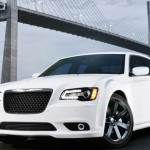 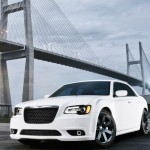 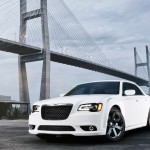 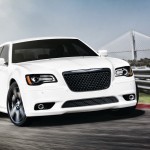 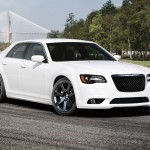 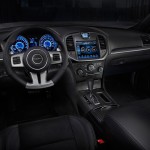 There’s something tough about an American, naturally aspirated V8. It’s the kind of swagger that makes adrenaline flow throughout the body. It’s the stuff Sunday drives are made of. Luckily for you, there’s an American-made sedan that packs a hell of a punch: Chrysler’s 300 SRT8. The SRT8 version of their popular sedan offers 45 more horsepower than their outgoing model, but it’s not all about power with the 2012…wait, of course it is.

The reason you get your hands on any SRT8 from Chrysler is power—big, heaping, manly chunks of it—the kind of power that makes the Corvette driver to your right rethink whether it was wise not to check the Z06 option, because this 4,365-pound four-door will have him weeping at the next traffic light. The 6.4-liter Hemi has power in every portion of the rev range. And if you’re unsure of just how much power you’re putting out, flip to the 8.4-inch EVIC (Electronic Vehicle Information Center) screen and it will give you horsepower output, zero-to-60 times, quarter-mile times and lateral Gs. Trick, indeed.

The refresh for 2012, a.k.a. the face-lift, takes a bit to get used to because, honestly, it doesn’t seem as muscular as the outgoing 300…at first. But once you have time to soak in the lines of the car, it becomes evident that this isn’t just some pedestrian attempt at adding a body kit. It’s an act of subdued, flowing lines that grow and grow on you, with the fender flares adding a more muscular stance and the 20-by-9-inch aluminum wheels beneath them hinting at the upgraded powertrain.

Power and train really explain the 300, because with 470 horsepower pushing the vehicle to a top speed of 175 mph, only the massive 14.2-inch Brembo brakes would be able to anchor this two-ton yacht to the earth. Couple all that power to the RWD drivetrain and front brakes holding down the tires, and this SRT8 will do highly contagious burnouts all day, smiling happily while it produces smoke clouds the size of Texas. Poor tires.
The Chrysler 300 SRT8 grows and grows on you. With effortless power, sport-car-like handling and a stately appearance, Chrysler has another hit on its hands, just like the original 300.

Interior: Chrysler has upped their game significantly on the new SRT8 with leather for days and an awesome touchscreen interface. The Detroit brand is finally on pace with its German rivals.

Exterior: Subdued with hints of muscle, it may take a few long stares to appreciate the lines, but once you do, you’ll never go back.

Floss Factor: EVIC offers all sorts of information pertaining to one thing: performance.

Flaw Factor: The braking-assist feature is way too overeager during twisty roads, always telling you to brake when there’s no immediate danger. Back off!