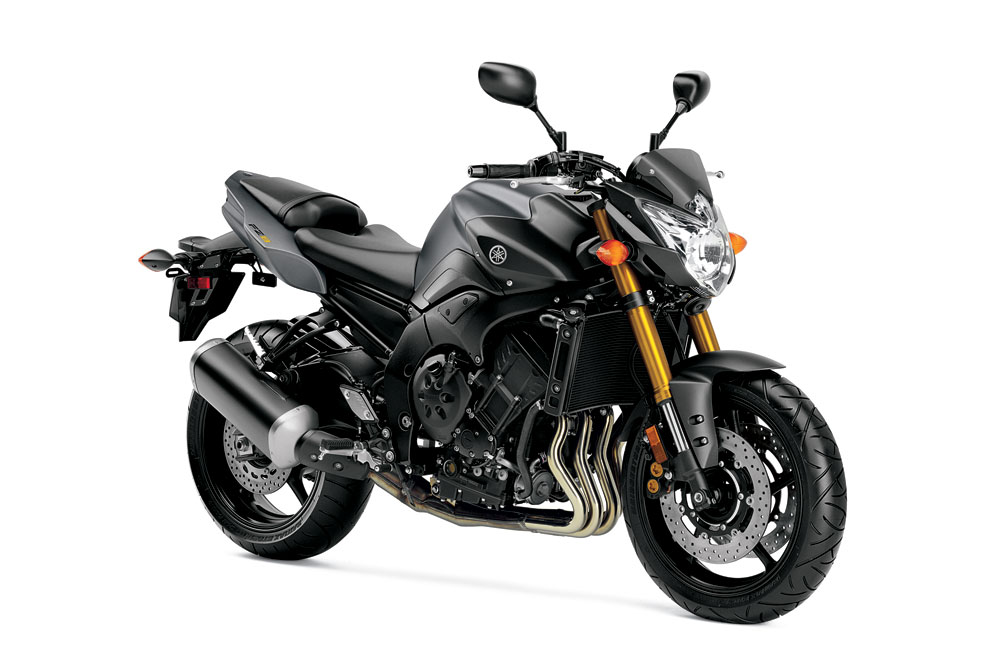 The motorcycle market is pretty split up in the States. The majority of bikes sold are big ol’ cruisers, while true enthusiasts cop superbikes outfitted in full race fairings with seat positions that’ll have you crying in minutes. But then there’s the class of sport bikes meant to be ridden on the street, and that’s what Yamaha was thinking with their FZ8. It’s kind of like the hot chick you never wanted because she didn’t show any cleavage. But you’re smarter now—the sexy one who doesn’t act like she’s all that is a keeper.

The 779cc four-cylinder motor nestled between your legs has been carried over from the previous generation R1, though modified for lower displacement along with milder cams, which gives you better low-end and midrange torque—something you don’t see on superbikes. Coming in at 467 pounds wet, the FZ8 isn’t so light that it floats across the road at speed, but it’s not heavy by any standards. It’s solid and confidence inspiring—really, everything you want to see in a bike. But this bike isn’t about the torque numbers; it’s about the package as a whole.

Whether you’re new to rippin’ it on two wheels or an avid rider looking to tear up canyon roads, the FZ8 is an all-around prizefighter. It is insanely fast but linear in power delivery and easily controlled. You can drop your knee in a turn and power out of it without worrying about high-siding, due to the sticky 180 series rear tire and the overall balance of this naked beast. But what really separates the FZ8 from the hunched-over riders thinking they’re running in MotoGP is the upright seating position and raised handlebars, more like those found on a dirt bike. Did you say a 1,000-mile ride up and down the coast of Cali? No problem. How about 160 mph in the desert? Easy. The FZ8 is pretty much perfect in every way. Not too much, not too little—it’s just right.

0-60: Fast with both wheels planted

Floss Factor: Stealthy black accents with gold strut tubes and a naked, street-fighter frame make the FZ8 straight menacing. The motor is tuned for the street, ready to pass whenever you twist your wrist.

Flaw Factor: While it undoubtedly looks badass, it’s got no exhaust note to back it up, and when you’re lookin’ to get down and dirty, adjustable front shocks would really help. But for the price, you really can’t go wrong.