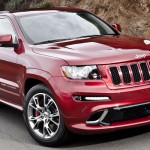 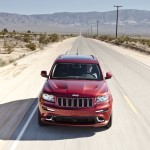 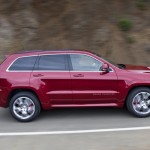 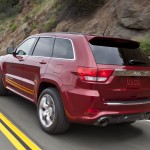 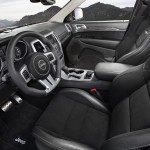 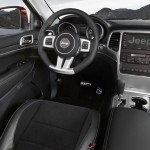 A Jeep designed for on-road performance instead of off-road trail crawling? Sounds mental, doesn’t it? Well, it is—but in all the right ways. The Jeep crew has put together version 2.0 of an all-weather performance machine that can crush a lot of so-called sports sedans on twisty roads, wet or dry, all while offering up more room for people and whatever gear they’ve brought with them.

That said, while Chrysler’s SRT division has done an outstanding job of convincing physics that this 5,150-pound sport-utility should go, stop and handle like it weighs a lot less, the illusion doesn’t quite extend all the way to the driver’s seat. From behind the wheel, you’re always aware that you’re surrounded by an awful lot of metal—even if it launches like a sports car. It’s not really a mark against the SRT8; it’s just a little disconcerting until you get used to it.

Once you do find yourself synced up with this burly bastard, however, you’ll be the master of every highway and byway. Thanks to the Jeep’s ferocious looks, commanding height and roaring exhaust note, only foolish drivers will fail to move out of your way. And for those fools who don’t yield, the spider-like grip and piles of old-school Hemi power let you pass them in the blink of an eye.

A nice side effect of the Jeep’s vault-like construction, however, is just how quiet and sheltered things feel inside. The world outside could be in the middle of a full-blown alien invasion, but if you’re inside the Grand Cherokee, your biggest concern would be tryin’ to decide what music goes best with bug-eyed monsters dropping out of flying saucers. Well, that and where you’re going to fill up the gas tank now that the world is ending. Because while the SRT8 does a lot of things incredibly well…the one thing it ain’t great at is drinking slowly.

Interior: The chunky SRT-standard steering wheel feels so meaty and solid, it could be used to steer a Nimitz-class aircraft carrier.

Exterior: Between the LED fog lamps, the deep-mouthed front fascia and the 295/45/20 rims, the SRT8 literally defines “badass.”

Floss Factor: The roar of the 6.4-liter V8 at full blast will curl toenails for blocks around.