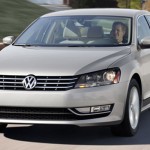 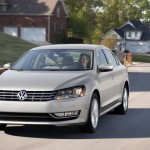 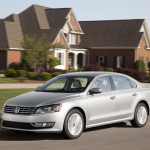 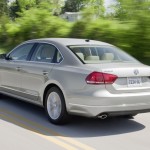 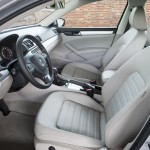 There’s prestige in being exclusive, but there’s money in being ordinary. Just ask Honda and Toyota, who’ve raked in Bill Gates–like sums of money over the last few decades selling reliable family sedans, like the Accord and the Camry. The Volkswagen Passat, in contrast, has remained a slow-selling family sedan that appealed only to those who’d pay extra for German engineering.

Well, the Passat isn’t an outsider anymore. Designed from the ground up to grab a bigger share of the American market, it’s been enlarged and cheapened—the price has been dropped and some features made optional. But don’t think this VW is a cheap car; it’s still a solidly built machine that lives up to the expectations of a German tourer.

The entry engine is a 170hp five-cylinder and a 280hp V6 at the top of the range. But the money choice is the midlevel, 2.0-liter, turbodiesel four-cylinder. Ignore the wimpy-looking 140-horsepower figure; the important number here is the 236 lb.-ft. of torque, cranked out just above idle. It’s enough twist to chirp the tires off the line with ease and gives the Passat effortless thrust with even the most feminine prod of the go pedal. But while this motor makes gobs of torque, it doesn’t use much fuel to do it. On the highway, one gallon of diesel will send you 43 miles down the road. Combine that with an 18.5-gallon fuel supply and the Passat will ride 796 miles on a full tank—enough to drive from the car’s new Chattanooga, Tennessee, factory all the way to Miami.

Multistate drives won’t seem like torture, either, thanks to an airy, roomy cabin and four inches of added overall length. An optional Fender stereo brings crystal-clear music to the interior. And while lesser models make do with mouse-gray cloth, our test car was fitted with leather-and-suede thrones that wouldn’t look out of place in a car five times the price. No doubt to be had, the new Passat is a car that’ll appeal to the masses but hasn’t sold its respectable German soul to do it.

Interior: The ’12 Passat has best-in-class rear legroom, makin’ it feel more like a mini Maybach than a grown-up Beetle.

Exterior: The VW’s front end and stance make you think of bigger, pricier German sedans, which ain’t
a bad thing.

Floss Factor: Each and every Passat you see in the States was made right here in the new Tennessee factory—the first VWs built in the U.S. in almost 25 years.

Flaw Factor: If VW meets its sales goals, Passats will soon be as common as Camrys. Expect yours to see plenty of twins in the parking lot.