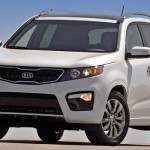 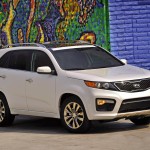 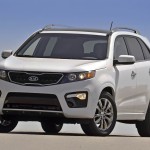 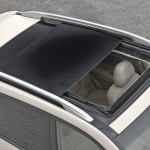 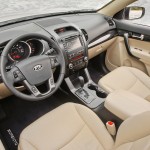 Kia is going after the top players in the SUV field with the 2012 Sorento, producing high-end vehicles for successful individuals at an industry-leading price point. The 2012 version is not a complete remake, but Kia has added enough options and features to warrant a second glance compared to its earlier models. Several interior upgrades give the Sorento a polished look to help it compete with the classier (and more expensive) competition. Nothing’s been changed on the outside, but then again, Kia has sculpted a clean, classy, simple crossover, so there’s no rush in the looks department.

Floss factor aside, the big addition to the 2012 lineup is the 2.4-liter direct-injection GDI engine (similar to the engine in the Optima). The GDI offers better performance than last year’s four-cylinder option, and it sips fuel better too, netting 32 mpg on the highway. This offering, when paired with the other Sorento variants, gives Kia a very clear advantage over the competition. No engine feels like a sacrifice; it’s just about getting what makes sense.

The 2012 Sorento fits the profile of the bachelor and the family man. There are pluses that suit both—specifically the speed. The 3.5-liter V6 has some get-up, given the weight of the Sorento, but there is some transmission lag when accelerating hard. That said, the handling is on point. The Sorento zips in and out of traffic with the ease of a sedan and the vantage point of an SUV. It’s the best of both worlds.

With all the technologically inspired bells and whistles added to the updated model, it will appeal to a slightly cooler crowd than in previous years. Don’t be surprised if you see Blake Griffin jumping over this baby in the dunk contest next year—that is, of course, if an actual NBA season takes place.

Interior: The inside is clean and straightforward. New perks like the hands-free UVO infotainment system and heated-wood steering wheel give the feel of a much more expensive whip. And the new YES protective seat treatment is a plus in keeping your seats soil free.

Exterior: The addition of a few chrome and steel accents make the Sorento stand out from much of the midpriced competition. The added chromed dual pipes (GDI four-cylinder), newly designed wheels (EX) and stainless step pad (SX) increase the stunt factor.

Floss Factor: The list of tech improvements is way too long to run down, but really, you could impress even a Mercedes owner with the advances on the Sorento.

Flaw Factor: Retuned for the SUV, the GDI engine has been scaled down from 200hp to 191hp at 6,300 rpm. Fewer horses equals less fun.