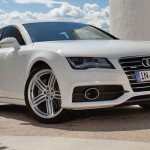 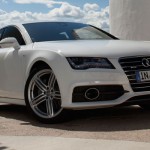 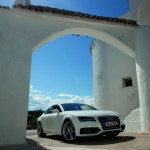 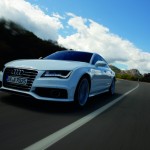 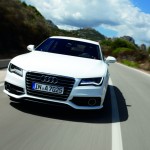 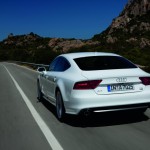 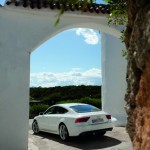 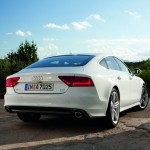 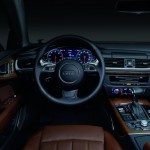 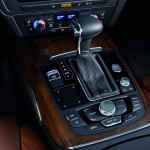 In a society engulfed by high-end nameplates, Audi has systematically pushed itself to the forefront of the luxury segment. From the unmistakable Audi grille to the curvaceous sloped rear with retractable spoiler, the A7 will bring envy to the faces of any Panamera or CLS owner that you’re caught next to in traffic. With most car companies now sportin’ LED lights and a huge front grille design on their vehicles—an Audi original—Audi has managed to keep a fresh face on their lineup.

Slide into the driver’s seat and the A7 will surround you with more technological gizmos than your local Best Buy. At first, anyone who is not tech savvy will be overwhelmed by the surplus of lights, buttons and knobs from Audi’s still-better-than-most MMI system. Everything is within a finger’s reach, and readouts are displayed on a 6.5-inch high-resolution display—from the music playing on the Bang & Olufsen sound system to the Google Earth navigation. With adjustable functions available for almost every gadget you can attach a wire to, including the interior lights, the A7 is adaptable to your personal preferences.

Beyond the plushy and gadget-ridden interior is the supercharged V6, which powers the five-door coupe with ease. Although 310hp may not seem like much in a car that weighs over two tons, slide the shifter into Sport mode and the A7 exhibits its ability to handle like a sports car half its size. If speed isn’t your thing, then simply set the suspension to Comfort mode, tilt back your seat and feel the A7 transform from a corner carver to a boulevard cruiser.

To those thinking posh styling and comfort doesn’t cost, better pump the brakes: Checking the option boxes on an A7 will jump the sticker price to a hefty 80 large. But if you happen to have the spare pocket change lyin’ around, the A7 is one of the best looks money can buy.

Interior: One thing Audi didn’t skimp on was materials. Leather, aluminum and “fine-grain ash inlays” throughout the interior—mixed with modern technology—equals stimulation of all the senses.

Exterior: Fast-back sedan styling is usually a hit-or-miss situation, but glances quickly turn into gawking stares from bystanders. The bold front end pulls you in as your eyes ride down its roller-coaster-esque roofline.

Flaw Factor: Although it’s a plus to be able to see a live image of where you are headed with the Google Earth GPS, it tends to be a little late on giving directions, which leads to some missed turns.