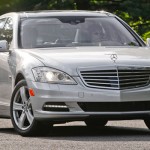 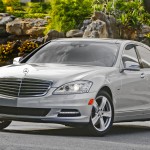 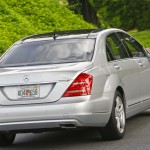 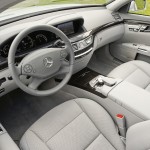 In the luxury sedan game, having the chillest ice is just as important as the emblem on the hood, and the S-Class doesn’t disappoint on either level. The S400 offers two separate 15-speaker stereos: a 600-watt Harman/Kardon surround-sound setup comes standard, while a 1,200-watt Bang & Olufsen unit is $6,400 more—and totally worth it. Optional rear TV screens allow backseat passengers to watch separate DVDs or play individual video games. The front passenger can even watch a movie on the navigation screen—while, from the driver’s angle, the display shows a completely different image. That’s some high-tech magic!

On the road, the S400 glides over bumps and lumps as though they didn’t exist. It’s like floating on air, which is pretty accurate, thanks to the S-Class’s air-ride suspension. While it’ll never be confused with a Ferrari in the curves, it still handles winding roads with vigor.

The S400’s hybrid powertrain—teaming a V6 with a small electric motor—provides adequate acceleration; however, if it’s not powerful enough for you, the S-Class also comes in 382-, 510-, 536-, 563- and 621-horsepower versions. That’s a lot of choices, and if we had the scratch to choose for ourselves, we’d buy them all.