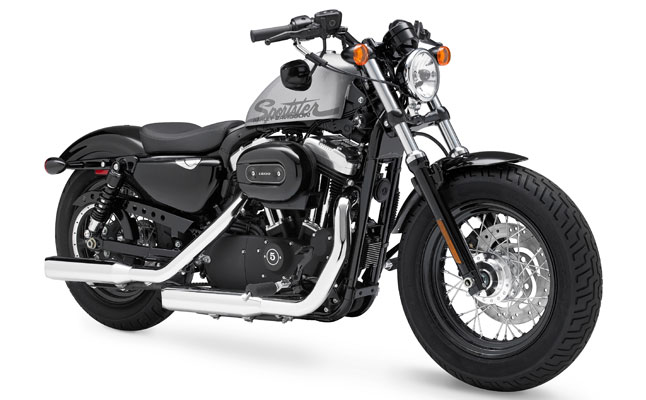 Up until recently, Sportsters weren’t known for their brawn and mannish mentality amongst the Fat Boys and cruisers Harley-Davidson offers. Harley has gone full throttle as of late, however—modifying, allowing customizing and bringing a whole new generation of badass bikes to the streets, with the Sportster being one of their most accessible and customizable hogs to date. Part groundbreaking design and part classic cues, the Harley Forty-Eight rolls heads everywhere it rides.

Starting with a powerful 1,200cc V-Twin engine that purrs to life (aftermarket exhaust will surely make it growl), it offers low-end grunt for accelerating and decent ratios for highway cruisin’, though the small 2.1-gallon peanut fuel tank offers only about 100 miles of ridin’ between stops. The five-speed gearbox provides effort-free shifting, but because of the engine’s grunt, trying to shift full throttle becomes an exercise in how hard you can hold on. Hint: Upshift by lifting off just the throttle, clickin’ up a gear and leaving the clutch alone. This will allow you to hold on with both hands without worrying about the force of inertia sending you into the rag-doll effect.

The look of the Forty-Eight is a clear departure from most of the H-D lineup, and it’s this point that catches the eyes of each and every passerby. The squatted stance mixed with fat tires, the single headlight and the chopped rear fender aggressively mimic street brawlers of the early customization days. With a bad demeanor, citizens might mistake you for a one-percenter.

The Forty-Eight is a bike that can be used as a starter piece or as another trophy for your collection. It’s easy to ride and great to look at, and if H-D continues on this path of righteousness, the future will be as storied as their past, with continuous excel-erration.

Floss Factor: The thick sidewalled tires carry their own swagger and set off the bike in the smallest yet most visually stimulating way

Flaw Factor: Quiet exhaust from the factory and a seat so low and horizontal make it seem you’re going to slide off when applying a full twist of throttle.