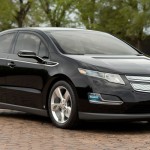 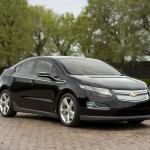 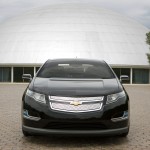 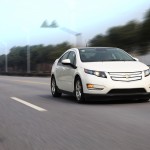 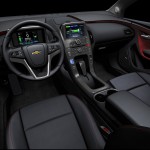 Plug it in, plug it in, let me begin: The Chevy Volt is going straight for the Prius’ jugular in the eco game. The fact is the Volt thrives on kilowatts, and if you’re commuting fewer than 35 miles daily, you can kiss the pump goodbye. Though 35 miles may sound minuscule, they say the average American driver travels 29 miles per day. So if you’re a commuter looking to rid the gas bill, all you need is the correct voltage.

Sure, there are some faults. For example, charging takes a while (about 10 hours on 120v), and if you need to rely on the gas motor to extend range, it takes premium fuel, which defeats the purpose of saving money. But for those 35 miles, you’ll get 100 percent fuel-free and limitless driving.

As for the interior, everything has a futuristic theme, and the dual seven-inch monitors—one focusing on audio/climate/nav while the other focuses on the instrument cluster— offer constant streams of information, so you’re always aware of what’s happenin’, even if they could distract you a bit too much.

With a slick exterior cutting the wind, along with an even slicker technology curve breaking the fuel lust, the Chevy Volt is going in precisely the right direction: forward.