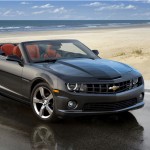 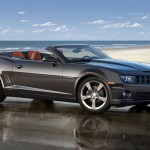 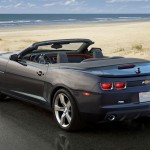 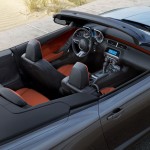 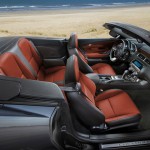 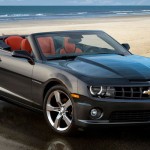 Despite the trend in recent years to outfit convertibles with sturdy, folding hardtops that make them look like their coupe counterpart when the top’s up, Chevy’s new Camaro Convertible sticks with an old-fashioned soft lid. This car has no self-confidence issues when it comes to being a ’vert. In fact, it’s prouder than an ugly baby’s parents.

Unlike many convertibles, the ’Maro was designed from day one to be as similar as possible to its coupe brother in terms of ride, handling and performance. The engineers’ work paid off in spades. This muscle car’s chassis is so strong, it’d be easier to twist a comparable BMW 3 Series convertible than the Camaro. All that extra support contributes to a 246-pound weight gain over the hardtop, but the 6.2-liter V8 is so jacked, you’d never know the difference unless you dug through the turns at a track.

Convertibles tend to be more about style than speed, yet the Camaro has plenty of both. Even though they’ve become a familiar sight, those concept-car creases and exaggerated proportions still look hotter than Rosa Acosta stepping out of the shower. Without a roof in place, though, the ’Maro looks almost impossibly low and mean, like a Hot Wheels car blown up to life size. Raise the top and the car still looks good, but a single glance at this machine with its roof tucked away will tell you it was made to let the sun shine in.

Inside, leather-wrapped thrones give the front two occupants room to stretch out while taking in the scenery, but they’ll still hold you tight when you want to make the car hustle. Every piece of the interior—from the boxy dual gauges of the instrument panel to the meaty heft of the Hurst short-throw shifter—seems chunky and solid, like it’s built to last. As long as there are tires and fuel made for burning, there’ll be a place for stylish, powerful rear-wheel-drive convertibles like this. The ’Maro just happens to be the best of that crew today.

Interior: While the tiny windows and low roofline mean the cramped cockpit can induce claustrophobia with the lid raised, dropping the top turns the Camaro’s guts into a much more comfortable place for boulevard cruisin’.

Exterior: Few cars that sell for less than six figures will draw as many stares as the ’Maro with the top down. In fact, plenty of rides that go for more than 100 stacks look anonymous in comparison, too.

Flaw Factor: The manual transmission’s skip-shift feature forces you to shift directly from first to fourth unless you rev the motor high enough before moving the stick. It’s designed to save fuel, but it just ends up annoying you.