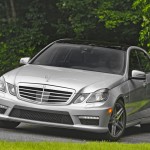 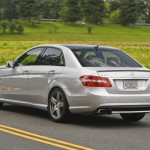 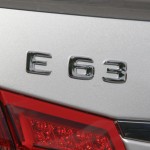 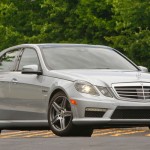 If cars were movie characters, the E63 would be Arnold Schwarzenegger’s emotionless robotic killer from The Terminator: an absurdly powerful, deadly war machine clad in a muscular skin designed to help it operate under the radar—with a Germanic accent to boot. Beneath the ordinary exterior, the speed-hungry gang at AMG has changed around enough hardware to give this car Porsche-hunting capabilities.

Chief among those alterations is the heavy metal under the hood. The E63’s naturally aspirated 6.2-liter engine is the first V8 built entirely by Benz’s go-fast division, and they poured into it every bit of expertise they had. Maximum power comes on late for such a big engine—torque peaks at 5,200 rpm and horsepower at 6,800—but the 6.2 has so much pull, it doesn’t feel peaky; it just feels like it has power for days, though after 130 mph, it seems to hit a “wall.” The adjustable seven-speed automatic transmission has so many tricks, you might think Mercedes bought it from Ferrari. Leave it in Comfort mode for shifts so smooth you’ll never notice them. Pop it into Sport or Sport Plus and it’ll hold onto gears as long as possible and bang off gear changes like shots from a Glock. Or twist the switch to Manual and assume responsibility for all the shifts yourself, using the metal paddles behind the wheel. Likewise, the multimode suspension flicks between firm and soft faster than a Sleep Number bed.

Working hand-in-hand with the motor are the suspension and gearbox, which contain enough electronics to franchise a Best Buy. It would take hours to learn all the controls, but the E63 makes it easy for those interested in the car’s primary mission of hauling ass: A simple punch of the AMG button on the center console locks the suspension, transmission and stability control into battle mode. Hasta la vista, baby.

Interior: Imagine a leather-lined fighter jet with room for four and you pretty much have it nailed. It’s simple, businesslike, even a little severe— but never uncomfortable.

Exterior: With just the right amount of AMG muscle added to the E-Class’s clean lines, the E63 looks ferocious without standing out too much.

Floss Factor: The naturally aspirated V8’s music is a joy for the ears anywhere in the rev range, from its menacing burble at idle to the demonic howl it emits under full throttle.

Flaw Factor: The car is so capable and refined, it’s almost too easy to find yourself going 20 or 30 miles per hour faster than you thought. But is that really a flaw?