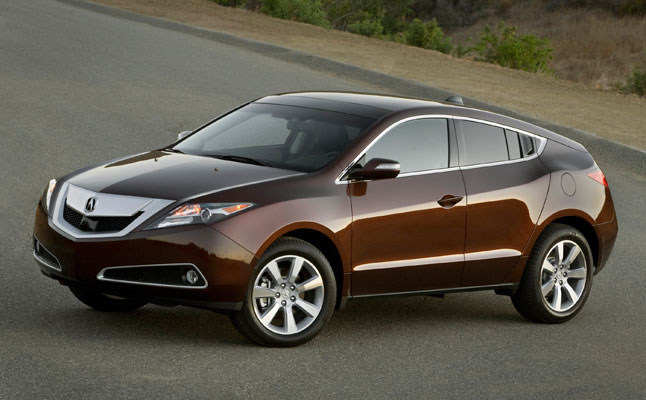 The Acura ZDX is a hybrid, but not in the regular sense. By combining distinct cues from Acura’s sedan and SUV lineups, the low, sleek and muscular ZDX makes sense of that Acura grille—often looking confusing and downright ugly on their sedans—and, in turn, becomes the Acura to get for one season or all of them. It’s also the best-looking model currently available.

Most of Acura’s fleet comes equipped, or is available, with their Super Handling All-Wheel Drive (SH-AWD) system—optimally transferring power from left to right and from front to rear, allowing for full-throttle turning—but the ZDX is the best platform to exploit its greatness. Whether it’s on mud-covered roads or rain-soaked pavement, there’s confidence in knowing the ZDX will cover your tracks if you get in over your head. Plus, with stock 19-inch wheels, there’s plenty of room for some forged aftermarket joints; match that with blacked-out tint and you have a silent killer.

Even with the SH-AWD system, if you had no power there would be no way to test its greatness. Luckily, Acura has you in the oomph department. The 300hp, 3.7-liter V6 comes equipped with drive-by-wire throttle, which sharpens throttle response and induces a menacing growl from the intake whenever the right pedal gets flexed. Opt for the Advance package and you’ll get a sport steering wheel, which connects the road to your hands with fluid, fast motion.

The interior follows the same overall muscular tones of the exterior, lending itself to separating both passenger and driver; basically, it feels like you have your own space inside the cabin. Although trunk room is something the ZDX doesn’t have much of, so pack light.

Without a shadow of a doubt, the ZDX is doing big things in a small package: excitement, looks and fun—the rest of the Acura lineup just needs to catch up!

Interior: Room is somewhat tight in the rear, but what it lacks in space in the back, it makes up for with a cabin that makes you feel like everything was designed just for you—so long as you’re up front.

Exterior: With a low beltline and roof, the ZDX is strikingly squatted on the pavement. Throw on some wheels, black out the windows and lower it, and you’ll have something special on your hands.

Floss Factor: With SH-AWD, pulling off fast turns or getting out of sticky situations is as easy as stomping the go pedal.

Flaw Factor: Even though you get a powerful V6, gas mileage ain’t great. Can we get some range?