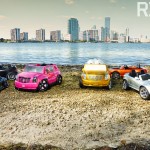 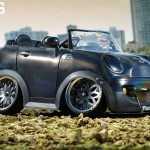 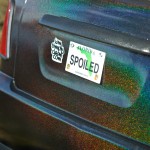 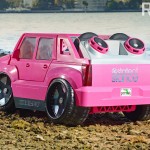 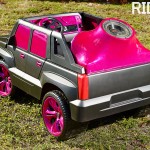 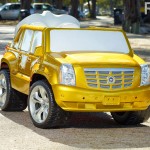 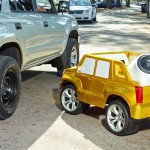 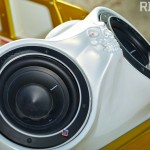 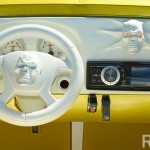 IF YOU LIKE THESE POWER WHEELS, SCROLL DOWN THIS PAGE TO SEE ONE FOR SALE!

Pow, pow, Power Wheels— it’s a slogan you can’t help but read in the same tone as the ’90s commercials. Whether you had a classic Jeep or Harley or just dreamt of finding that big box under the Christmas tree, Power Wheels are undoubtedly a part of your childhood. To a kid’s imagination, Power Wheels have always had working radios, big engines and flashy paint, but to car customizers Robert DeLosh of De Leon Springs, Florida, and Denver Pettigrew Jr. of Miami, this children’s toy was in need of some real upgrades.

Having never met each other and hailing from different parts of Florida, both men traveled a similar road to building custom Power Wheels. For five years Robert ran a paint shop behind his house—“It was full customization,” says Robert, “I was building racecars and hot rods and all kinds of stuff”—while down south in Miami, Denver was customizing cars of his own. The passion for customizing turned to Power Wheels after both men had children. “I started when my son turned one,” says Denver. “It wasn’t until he turned two that we bought the bigger one [and] we started messing with it.” Robert parallels Denver in that he too began with the car he’d purchased for his daughter three years ago.

Though a love of cars and family unite the men—it is clear when it comes to their creations—two separate schools of thought are present. Robert draws from his past experience with paint and bodywork, laying bright colors and making new fiberglass dashes and speaker boxes. “All of them have two 8-inch Rockford subs like my pagan [Editor’s note: gold Escalade] one,” says Robert. “It’s got a 3.2-inch screen in the dash, all the lights work, [and] it’s got functioning gauges.” He can also upgrade the performance, upping the voltage and increasing the speed from 8 mph to an estimated 12 mph.

Inversely, Denver keeps his voltages stock to err on the safe side. “Basically, the way they were meant to be driven, that’s the way it is,” says Denver. He adds, “All I do is lower them and make them look good.” An admitted suspension and performance person, Denver focuses primarily on building kits to get that wheel tuck that would leave car builders envious. With his son’s Mini, Denver has gone so far as to weld in a new frame and allow for the height to be altered at the push of a button.

The styles may differ, but both men agree that building custom Power Wheels is gravitating toward a full-time job, taking up to two weeks for one of Robert’s or two days of undisturbed work for Denver’s, and costing between $800 to $1,400 and $300 to $750, respectively. Having found success quickly just through social media presence, both men are still trying to figure out the direction of their businesses, but they agree that it’s about creating cars for kids “to take to car shows and show off along with their parents’ cars,” says Robert. “The most rewarding thing is seeing the looks on the kids’ faces,” Denver echoes.

THIS EBAY AUCTION WON’T LAST MUCH LONGER, SO CLICK HERE TO SEE HOW MUCH THESE SELL FOR!