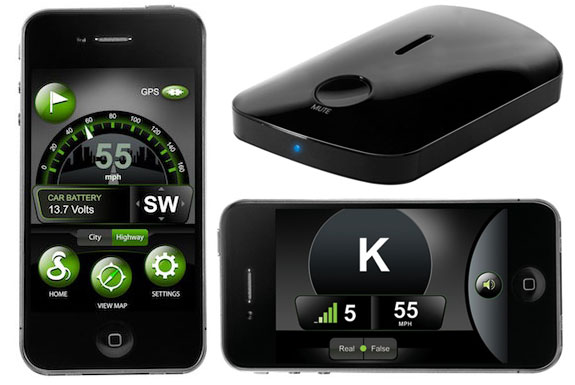 Radar detectors are a great way to help you pick up on the police before they try to slap you with a ticket, but they haven’t changed all that much since the ’80s. Sure, they’re smarter and more sensitive, but at the end of the day, most radar detectors are bulky boxes on your windshield that just beep when they see radar.

Cobra’s new iRadar, however, flips the status quo by adding in a piece of everyday technology: your iPhone. The detector connects to your phone through Bluetooth, so the only cables you need are power cables. Once connected, just turn on the iRadar app and your phone will tell you when you’re coming up on any of the speed traps, red light cameras or dangerous intersections in Cobra’s database—along with telling you if you’re being blasted with radar or laser waves. You can even see all the known dangers on Cobra’s list using Google Maps.

Of course, if you don’t have an iPhone or forget to plug it in, the iRadar will still perform all the usual radar detector tricks—it’ll beep and flash when the right radio waves wander into its electronic eye. But for anyone out there with Apple’s super-phone, this little box could make driving a lot easier (and more fun).