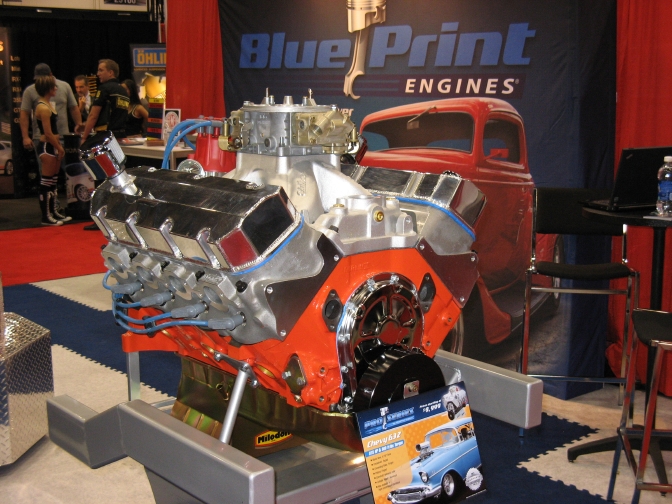 Stock doesn’t cut it. Everybody knows that. Sure, an off-the-lot ride’ll get you from A to B, but if you want your car to reflect who you are, you gotta mix things up a little bit. We wouldn’t have RIDES if people didn’t modify their cars to better suit their personalities. And while the changes you’ve made outside your car or in the passenger compartment are obviously what people are gonna notice first, packing some extra firepower under the hood is a time-honored way of making your whip your own.

With that in mind, BluePrint Engines has unveiled their lineup of ProSeries engines. Designed to pony up the most horsepower for your hard-earned dollar, the series offers a range of Chevy small blocks and big blocks, making between 540 and 815 horsepower. Prices vary, so hit up the BluePrint Engines website for details.

Kearney, Neb. – BluePrint Engines has announced that it will introduce its new BluePrint ProSeries™ line of extreme horsepower engines at the upcoming SEMA show in Las Vegas, Nov 2-5. This new line of affordable world-class engines is specially designed for car enthusiasts and drivers looking to step up in power and performance, says company president Shawn Sterling.

“The BluePrint ProSeries™ engine is the perfect engine for people who really want it all—quality, affordability, extreme horsepower and torque,” says Sterling. “With our new ProSeries engines, you don’t have to sacrifice one for the other. We’ve driven power and value up with one hand, while driving costs down with the other.”

The new BluePrint ProSeries™ line is the industry’s first full line of extreme horsepower engines, ranging from 540 HP to 815 HP. The new line includes two Chevy small block engines (a 427 and a 454), four big block Chevy engines, and a 427 Ford Stroker Windsor. All ProSeries™ engines are streetable and can be ordered in base or dressed configurations, with most priced in the $8,500-$10,000 range.

Please the see attached table below for the complete BluePrint ProSeries™ product line with engine displacements and peak horsepower and torque ratings.

“Every BluePrint ProSeries™ engine is built one engine at a time by a skilled BluePrint craftsman with the best all-new name brand performance parts on the market,” says Sterling. “Quality names you know and trust, like World Products, Scat, Edelbrock, Comp Cams, MSD and Holley to name a few. That’s really what the new BluePrint ProSeries™ engines are all about—reliable quality, extreme performance and affordability.”

BluePrint Engines is a leading manufacturer of high quality high performance engines for car and marine enthusiasts and distributors worldwide. Founded in 1990, BluePrint Engines has built and delivered more than 30,000 high performance engines to customers around the world. The company prides itself in being large enough to provide the service and reliability its customers demand, yet small enough to hand build an engine that’s just right for them.