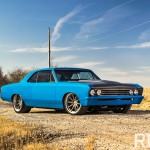 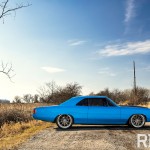 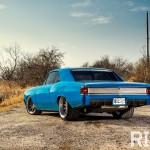 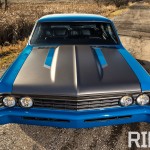 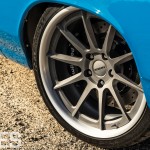 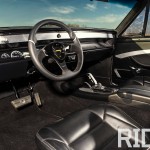 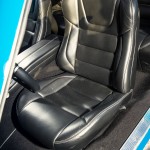 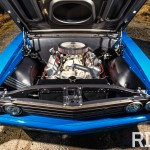 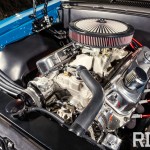 Even though a shop may obtain a certain degree of satisfaction with each and every build, at times it’s nice to flex your creative muscles and do exactly what you want when you want on a vehicle that isn’t subject to a customer’s demands. Roughly four years ago, Phil and Jeremy Gerber and their crew at Roadster Shop in Mundelein, Illinois, gave in to their urge to put their own spin on a classic muscle car and chose a 1967 Chevelle shop car as their canvas.

It began as an off-and-on project, because the volume of vehicles at the shop made it increasingly difficult to dedicate any real manpower to the Chevelle; Phil and Jeremy didn’t want their shop car to move ahead of customer vehicles with deadlines attached. “I eventually had to pull a couple guys off other things and on to the Chevelle full-time to complete it,” explains Phil. Once officially underway, the Roadster Shop crew began to put the Gerbers’ master plan into play.

Known for initially producing chassis, constructing a Chevelle as their shop car was only fitting. “The first muscle car chassis we built in 2007 was for a Chevelle,” says Jeremy. “Before that, it was all street rod chassis for cars from the 1930s to ’50s.” The Roadster Shop Fast Track Chassis underneath is complete with their own one-off Roadster Shop suspension components, 13-inch Wilwood brakes, Afco coilovers and a Strange Engineering Ford nine-inch rear end. All of this transforms the Chevelle and its antiquated “muscle car” drivability—or lack thereof—into a pro-touring tyrant that can rival most new-school sports cars.

In typical Roadster Shop fashion, the body of the Chevelle received plenty of attention, as virtually every panel on the car was modified to a certain degree. The front bumper, for instance, was sectioned, tucked tight to the body and painted the body color as opposed to chrome. The rest of the body was shaved and smoothed, with the elimination of all door handles, emblems and mirrors. Out back, the Roadster Shop crew handmade a custom bumper with diffuser and welded the custom taillight housings to the body to give it a look unlike any other. To complete the aesthetic, they also mounted a fresh set of Forgeline wheels—19×9-inch front and 20×12 rear—wrapped in meaty Michelin rubber. One of the most striking aspects of the car is its eye-catching hue, BMW Laguna Seca blue. “Me and my brother fell in love with that color,” says Phil. “I couldn’t get any of our customers to do it, so we did it instead.”

“Now that the car is done, everybody loves it,” says Jeremy. “Every car we’ve built for ourselves, we’ve done a bit more on the loud side to gain attention, because it’s also an advertising piece.”

RELATED: Mississippi Mogul: How This Chevelle Made Its Way To The Top

For the power plant, they went a little old-school, steering away from the current trends. “I had a little soft spot for the torque and power of a big block,” says Phil. “It was cool to go a different route with it, opposed to the LS motor.” With that in mind, an all-aluminum 540 big block producing upwards of 700 horsepower, built by Bill Mitchell, was nestled between the frame rails. With track-capable suspension and massive horsepower under the hood, this captivating Chevy was certainly set up to show off its pavement prowess, but before they could get it to the track, they got an offer instead. “We intended to take it to the auto-cross events and everything,” says Phil, “but before we could, we had an offer to buy it.” So even though this beautiful blue Chevelle has since migrated south—to Florida, to be exact—it still speaks volumes as to Roadster Shop’s capabilities and creativity, especially on a shop car.