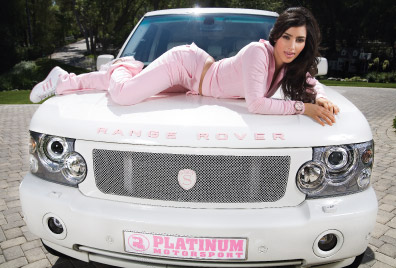 Kim Kardashian knows her lips really well and understands that size matters. Of course, we are referring to her signature rim line, which will be put out by Platinum Motorsport. “I’ll get on the phone and ask, ‘How many inches is the lip?’ or tell them that’s too small or too big,” says Kim. “I just really love cars.” And that is why every auto fiend should be trying to wife this sexy socialite (she is currently single and hotter than quad exhaust pipes). In addition to getting her rim on, she pushes a white Range that, even with a hint of pink, can still stunt on most dudes, and has the bragging rights of having owned everything from a Bimmer to a Ferrari 360. Plus, this 26-year-old with the killer curves is about to blow.

Previously known as the girl standing next to Paris Hilton, she’s now got her eyes set on doing movies (no, not those movies) and is working with MTV on a new sitcom, where she gets to play herself. But for tat legend Mister Cartoon and veteran photographer Estevan Oriel, she is acting as the love interest in their new graphic/photo novel, Lost Angel, that should be out in early 2008. Plus, she just opened Dash, a clothing line she started with two of her sisters. Now, don’t think you can just swoop up in ya custom slab and easily slay this beauty. Kim is pretty particular about what she expects a man to be driving. So study up, boys, if you trying to get up in her pink…er, Rover.

11 Responses to “Dash of Pink”