It’s official- our spot’s been blown! By now, all you internet-savvy types have probably seen the star of our December/January ’09 issue, the convertible Challenger. Over the past eight months, RIDES has been working in conjunction with Florida shop Coach Builders LTD, to build what Dodge says they won’t; a fully-functional drop-top version of their latest street soldier.Regarded by many as the industry leader in “airing-out” hard tops, Coach Builders carefully planned out their approach to the Challenger, assuring the build would be much more than just a hack-job. Reinforced to the nth degree, the car maintains the structural rigidity to hit the track, while keeping iconic throwback elements, such as the rear quarter window – which now detracts when the top is let back.After its big operation, Coach Builders went to work, decking out the car in true RIDES style. Dipped in Dodge’s signature shade of Snakeskin Green (ala the Viper), the Challenger now sits pretty, courtesy of KW Variant 1 coil-overs and 22” Foose Challenger wheels.While the car doesn’t make its official debut until SEMA, we’ve caught word that (lackluster) photos are all over the web. But keep a close watch of your local newsstand – a full feature, in proper, professional treatment is set to drop any day. Until then, here’s a few more teasers to wet your appetite. You may have first seen it elsewhere, but we promise to bring it to you right! 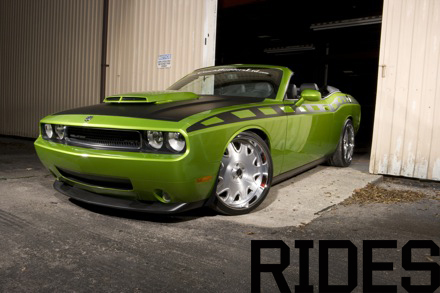 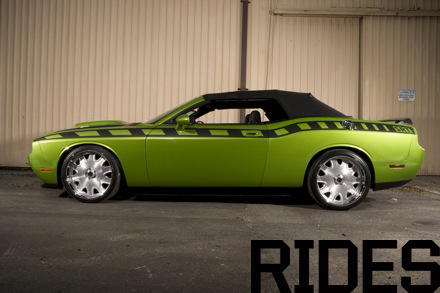