Yesterday, Audi failed to wow the auto world with the announcement of 2 new color offerings for its RS4 ultra-sport sedan. Known for jaw-dropping hues such as Imola Yellow and Misano Red, the additions of white and black were just a bit of a letdown.

So instead of blah, here’s a little “what the f?” “ooh-lah-lah”, courtesy of Brazilian pop-artist Romero Britto. Commissioned by Audi to create an ‘art car’ (something BMW is famous for), Britto painted this RS in a brightly-colored mural, from bumper to bumper. Having debuted this April at the ‘Art Chicago’ fair, the eye-popping Audi will tour the country, ending in Miami Beach where it will be auctioned for charity. 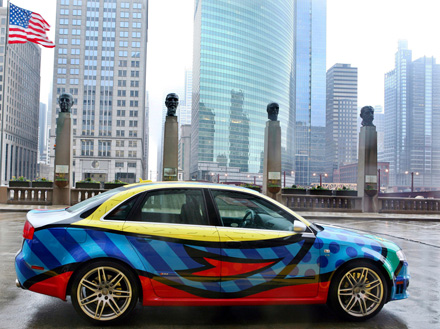 One Response to “In Living Color”